What A South African Anti-Gunner Reveals Without Meaning To 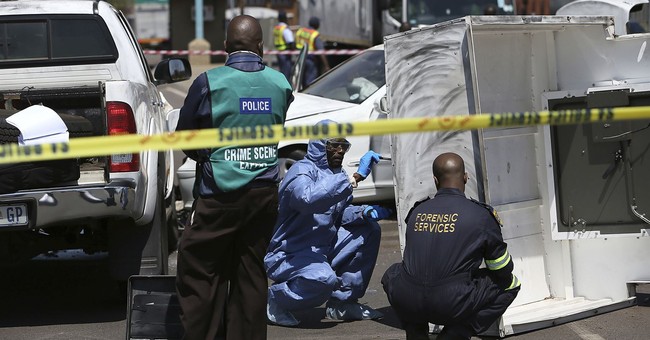 I get Google Alerts every morning on a variety of topics. Because of my work here at Bearing Arms, it includes terms like “guns,” “gun control,” and “stand your ground,” among others.

This means I get to see bits of news from all over the world as they relate to these terms. That’s how I saw a letter to the editor in South Africa all about how the violent African nation needs more gun control.

“Alarmed father accidentally stabs son to death”; “Gangster with bow and arrow kills pupil in schoolyard from the street”; “12 mourners beaten to death in minibus taxi on main road”. All highly improbable incidents anywhere in civilised society, but change the weapons deployed to firearms and we have three of the shocking headlines that have beset our gun-toting country in the past month.

After the slaughter on the R74 last weekend, our police minister mentioned, in the small print, a tightening up on control of gun licences, together with an amnesty period. Don’t waste your time, Mr Cele. Get real, get a grip and ban all private ownership of handguns and automatic weapons, and severely restrict licensing of hunting rifles.

Then, after a brief amnesty period, equip police vehicles (and police stations) with crushers for police officers to instantly and permanently decommission illegal weapons discovered through “stop and search” procedures, then arrest the possessor. As the US regularly demonstrates to the world, the absence of effective gun control facilitates senseless killings.

Look, Africa is a continent where guns are as plentiful as water–in some parts, probably more plentiful–and there’s a profound lack of a culture dedicated to the safe and lawful use of those guns. Africa is known for its warlords, after all.

With guns that plentiful throughout the continent, perhaps the letter writer would do well to realize that stopping the flow of firearms into the country is probably a fool’s errand. Instead, it would make more sense for law-abiding people to have access to weapons so they can defend themselves from those who have no such concerns.

This letter writer illustrates how warped the mind of the anti-gunner is, even in other countries. They go on and on about how effective gun control is, all while ignoring how it completely and utterly fails. Countries with gun control and low crime have low crime in spite of gun control, not because of it. Throughout the world, however, they’re the exception, not the rule. Look at the most violent countries on Earth. You’ll find the United States isn’t even close to the top of that list, but the nations that almost universally have gun control to some extent and have for years, if not decades.

Our media has given other countries the perception that we’re dangerous, violent, and ready to explode at any moment, but the truth is, we’re considerably safer than most.