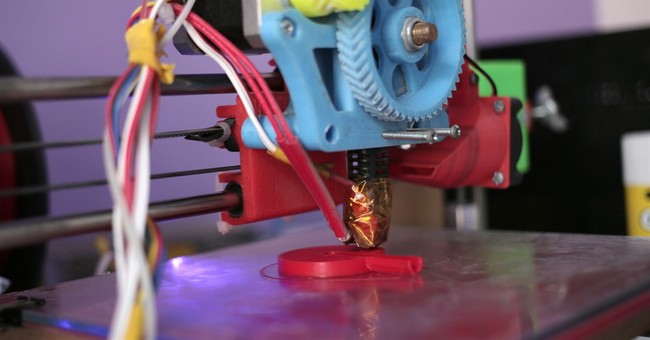 3-D Printed guns are here, and despite what some anti-gunners are trying to do, they’re never going to go away. At best, the law will make it so only criminals use them, but they’re not about to disappear.

Over at Vice‘s Motherboard, they point out that all the bruhaha over 3-D printed guns is only making them bigger.

Trump, for his part, doesn’t seem to have any idea that his administration stopped defending itself against Wilson’s lawsuit in the first place. He issued a tweet Tuesday that doesn’t make immediately clear whether he believes people should be allowed to distribute 3D-printed gun files.

Throughout the day, lawmakers have begun weighing in, and we’re now officially having a National Conversation about the legality of distributing 3D-printed guns.

This latest attempt to prevent Defense Distributed from operating freely is probably self-defeating. It’s already had a demonstrable impact in furthering the spread of Wilson’s CAD files. A screenshot in Underwood’s lawsuit shows that 3D-printed gun CAD files had been downloaded from Defense Distributed’s website 1,702 times as of July 28th. As I’m writing this, they have been downloaded 21,345 times, and the files are already floating around on torrent sites and elsewhere. Wilson is already using the lawsuits as a rallying cry around his cause.

This is called the “Streisand Effect” and is one of the most predictable rules of the internet. Whenever the government (or a celebrity, or a company) tries to censor something, they immediately make it exponentially more popular and widespread than it was in the first place.

That’s not surprising. While many people knew the technology existed, they didn’t care all that much about it. That is until everyone and their brother started screaming about how awful it would be if people had a new technology to enable them to build guns at home like they’ve been able to do for decades.

Alright, maybe not with quite that wording, but that’s the essence of what’s said. Building a supposedly untraceable gun isn’t new. People have done it for years and have done so legally. All that has really changed is that people now have a new tool to make receivers and someone figured out how to make one with fewer metal parts than most of us thought possible. That’s it.

Now, people are flooding websites to download these files, especially if there’s a chance they might soon be banned.

Once upon a time, the AR-15 and similar style rifles were a niche market for guns. Back then, hunting rifles and shotguns dominated the long gun market. People who wanted self-defense guns typically gravitated toward handguns for that duty, with maybe a shotgun for when things got really dicey. Rifles were for hunting, for the most part.

Then anti-gunners got their knickers in a twist because people could have AR-15s and AK-pattern rifles. They were scary looking and had to go.

Gun owners, being who we tend to be, went out and bought these guns like crazy. Today, the AR-15 is the most popular style of rifle in the country. They’re everywhere. There’s probably one almost every town in America.

That wouldn’t have happened if the anti-gunners hadn’t gone after them so hard, and that’s what’s happening right now. I’ve never particularly wanted to 3-D print a gun, but I have all those files on my hard drive, and in a USB drive as a backup because some of these people don’t want me to have them.

I’ll probably find an opportunity to use them too.

However, had the administration’s decision to drop the case happened and been ignored by the left, I doubt I would have worried too much about it. I’d have muddled on through life, content with what I have and what I could buy at the gun store. At least, that would be the case until or unless that changed.

It’s time to start looking at ways to combat violence that don’t focus on the tool being used. I know that’s hard for some people, but it’s past time.