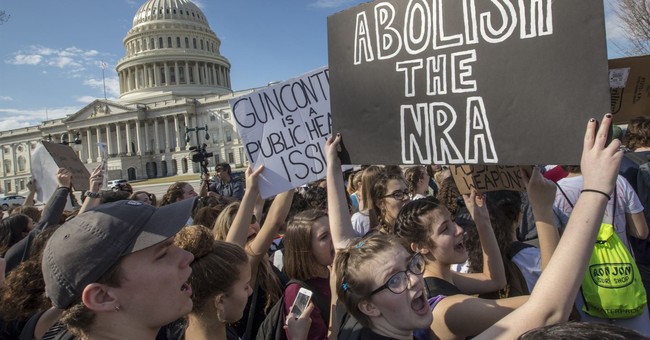 No one wants to take our guns away.

No, really, I’ve been told time and time again that no one wants to take our guns away. Gun control activists just want some “common sense gun reforms” but have no interest in taking away our guns.

But then at this past weekend’s anti-gun protests in Washington, D.C., the NRA got a hold of this prize. Between the “I want to repeal the Second Amendment” and the woman trying to argue people carrying guns have small penises, the NRA got a whole lot of derp in one video.

Yesterday was #Saturday, which means our HQ employees were at home enjoying the sun with their family and friends. Meanwhile, #misinformed #gun-grabbing #protestors were chatting with our social media team. As promised, here is part 1 of 3. Stay tuned! Happy watching! pic.twitter.com/teB8eDvXB9

As Beth Baumann argues over at Townhall:

Apparently the rest of us missed the memo, but loving the Second Amendment now means you have a small penis. What about those of us who are women? What are we “overcompensating” for?

Of course, then you have this one who seems to think that all gun owners have to “register” to own a gun.

some of the March for our Lives students have crossed the #MarchOnTheNRA divide and are talking to NRA supporters pic.twitter.com/rONyg7kNzO

I can’t help but be amazed at the number of people protesting who don’t even understand the subject they’re supposedly so passionate about. I mean, if you think the gun laws are insufficient, how can I take your claim seriously when you don’t even know what the gun laws are?

I mean, maybe she’s from California or some other state that has some kind of gun registry, but she’s at a protest in Washington, D.C., so I don’t see that as a valid defense of the stupid.

Then the NRA released this one where we see lots of people who don’t even understand what an AR-15 is, despite wanting to ban them.

What do you think about "fully semi-auto" #firearms? These misinformed #protestors seem to think they exist and that ALL #GUNS SHOULD BE #BANNED. #Protest 101: before you make signs and hit the streets, know the basics of what you’re #protesting! Stay tuned for more! #2A #NRA pic.twitter.com/S5mV8WOJoe

But then, as if that isn’t enough, we have this special case who thinks we should allow ourselves to be murdered by home invaders rather than defend ourselves.

SAVE THE BEST FOR LAST: This one #gun-grabbing #protestor thinks THAT YOU SHOULD NOT BE ABLE TO #DEFEND YOUR LIFE if an #intruder breaks into your house. The #NRA and our 6 million members know better than this and we will never stop fighting for the #2A! #EmptyHQ #FreeIceCream pic.twitter.com/SYWWztnl6Z

In almost all of these videos, though, we’re seeing people talk about taking away the Second Amendment, repealing it and allowing anti-gun lawmakers to take away our right to keep and bear arms.

But no one wants to take our guns away?

Look, every time one of these halfwits claims that no one wants to take our guns away, show them the mountains of examples of people talking about doing just that. There is a pile of people who want to take our guns away including a former justice of the Supreme Court. Remember that last one when they say no one important is saying it. I’d say a former justice is someone important.

That march was full of people who want to take away our guns. Hell, the vast majority of people saying no one wants to take our guns away actually do want to take them. They just know that’s a non-starter politically and won’t say it out loud for fear of tipping their hands. They want to appear reasonable with their talk of “common sense reforms” that aren’t really common sense when you understand the topic.

The NRA trolled these folks, which is awesome, but it’s also awesome that they got so many on video showing their ignorance as well as their true agenda.

Supreme Court Decision May Force Young Women to Confront Sexual Reality
Townhall
Paul Krugman's 2020 hot take on what the Biden economy would bring is coming back to burn him
Twitchy
US Army Jettisons GED Requirement Amid an Ever-Woker Defense Department's Desperation
Redstate
'Top Gun' Hits Over $1 Billion and the Left Is Going Crazy: Here’s Why
PJ Media