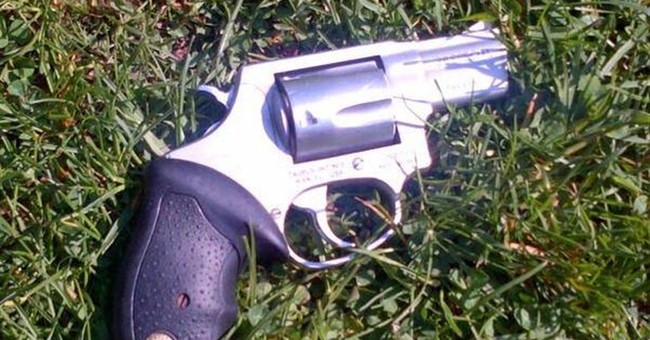 And, more importantly, we can back it up with both data and anecdotes, such as the pharmacist who stopped a robbery in his store.

Amir was sitting in his office when the suspects entered the pharmacy, but looked up when he heard some commotion.

“The man with the rifle ordered everyone down on the ground,” Amir said, “including one customer, a woman, who happened to be in the store.”

When Amir realized a robbery was in progress, he said he took his revolver out of a desk drawer and started to walk out into the shop holding the handgun. He was met by the would-be robber, who pointed the rifle at him, he said.

“I don’t know much about guns,” said Amir, “but it was a big gun and looked like an assault weapon.

“When he saw my revolver,” Amir said, “he yelled to the other man to run, saying ‘He has a gun’ and both of them started running away. I fired once in their direction, but it doesn’t seem like anyone was hit.”

Time and time again, we see that many of these terrifying individuals are cowards hiding behind their weapons. They’re not ready to deal with an armed citizen who is acting in a righteous manner. They see a gun in the hands of a law-abiding citizen, and they run.

The two men were found and arrested and are facing a host of charges including armed robbery.

Amir has instructed his employees to comply with robbers’ demands, but he’s the boss. He can comply or not, and in this case, he put up a fight. Both his instructions to his workers and his actions were right.

If employees put up a fight, they may well be shot. Especially if they’re unarmed. By instructing them to comply with instructions, Amir is trying to minimize the risk to his staff, especially since history shows that most armed robberies, while terrifying, don’t result in people getting hurt.

However, Amir was armed. That changes the situation completely. There was still a risk to human life, but he could direct that risk on himself rather than the other innocent people in the store. He took a chance, and it paid off. He stopped the robbery.

Especially important, though, is that the robbers wanted prescription medications. That means drugs they could sell on the street, possibly endangering still more lives in the process.

Amir stopped not just the robbery but may have indirectly saved several other lives. Not too shabby for a pharmacist, now is it?

This story has a happy ending in many ways, and I’d like to see these things happen a whole lot more often. Guns save lives. Period.