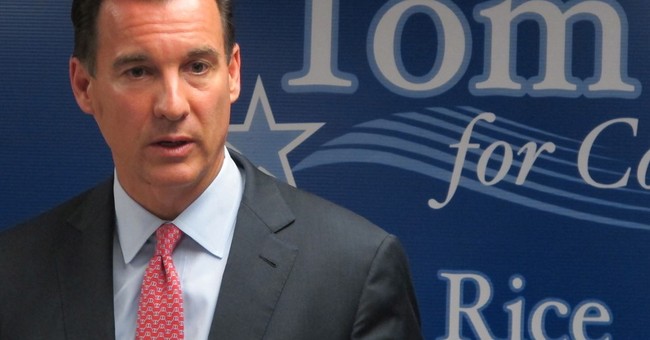 Every time I turn around, I become more and more convinced that anti-gunners never actually listen to themselves speak. They don’t engage a filter in their head, at least on the subject of guns.

Now, everyone can have a brain fart from time to time. It happens to us all, to be sure.

However, most folks would take a step back for a moment before trying to make hay over a gun group having a gun auction to raise money. Even the anti-gun folks.

But not this guy.

A Long Island congressman is taking aim at a local gun group for hosting a fundraiser for the National Rifle Association at a popular catering hall.

Rep. Thomas Suozzi, a Democrat who represents parts of Queens and Long Island, is blasting The Nassau County Friends of the NRA for organizing a fundraising function planned for next month complete with dinner at a banquet venue and an auction of weapons and prizes.

Among the items going to the highest bidder at the Sept. 27 event will be a .410-gauge Henry Lever Action Shotgun with Second Amendment engraving and a Colt Cobra double-action revolver with custom NRA grips.

“Children have been murdered in their schools throughout our country,” Suozzi said in a statement Tuesday.

“Mothers have demanded that the NRA not hold this antagonistic sideshow, with guns and ammo as enticements, in one of our neighborhoods. I stand with these moms and call on the NRA to cancel this event which will cause even more anxiety to our children and families.”

You know, that’s interesting. Why is it that only the NRA has to play nice in the arena of public debate? Why is it that they’re the ones who have to be “sensitive” to people’s feelings while their members are being demonized and insulted left and right by anti-gun zealots?

The NRA is holding an event? So the hell what? They’re not breaking any laws, and like it or not there are people on Long Island that support the Second Amendment.

Can those mothers be safely ignored? It sure looks like it.

Frankly, if children and families are getting anxiety because some law-abiding citizens are exercising their right to keep and bear arms, then they need to toughen the hell up. I’m sorry, but that’s just how it is. Guns are a part of life, and I hate to break it to everyone involved, but if you’re going to live on this planet, learn to deal with people doing stuff that you disapprove.

It should be noted that these auctions will comply with all applicable state, federal and local laws. Criminals won’t be armed at this auction. This is nothing but a fundraiser for a pro-gun organization using a gun auction to do it. How is it any different than an auction being held to raise money for a sports program? Or the Girl Scouts?

It’s not, except whining anti-gunners want to make it something different. They want to create a different set of rules for how gun owners are allowed to be part of society.

Personally, I’m calling on the group to not just continue with the auction, but to do it again in the very near future as a middle finger to people like Souzzi.