Left Argues Americans Hate NRA, But Do They? 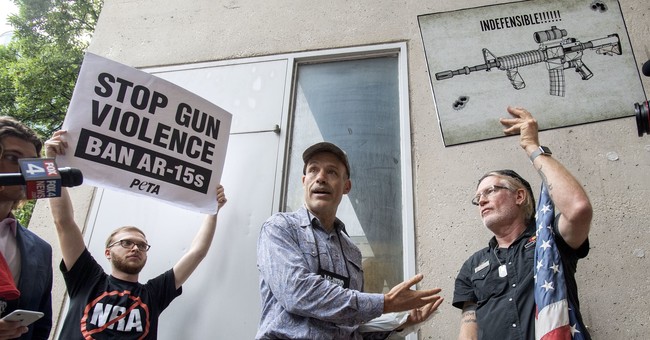 The NRA has gotten a lot of bad press lately, and that’s about par for the course. I’m not sure any organization has been as vilified by the media as the National Rifle Association in recent years. The media has done all it can to make it out like every school shooting is the result of the NRA’s involvement in politics.

As the media has allowed people like the Parkland kids to have their say unchallenged on the air, while NRA advocates are usually matched with an anti-gunner in an effort to present “balance,” it’s not surprising. I still remember someone dropping my support for the NRA in an argument as if it were some kind of trump card that proved everything I said could be dismissed.

Now, it seems the left is arguing that the NRA is more hated than ever, even though the media has no moved on from talking about guns.

The National Rifle Association is striking out with voters.

A new report from the progressive think tank Navigator Research shows the NRA has suffered “lasting damage” since the Parkland shooting. In fact, Navigator writes “the group is now underwater, and shows no signs of bouncing back.”

Over 1,100 people took part in the survey, which was conducted last month. Many respondents said stronger gun laws would be an important issue in their midterm election votes. This is a major change from years past, in which gun control measures were quickly struck down by the NRA.

Public opinion of the organization has usually suffered after mass shootings like Columbine and Newtown, when media coverage tuned people into gun control issues. These news reports “contributed to and sustained the NRA’s declining popularity,” the Navigator study said.

But support for the NRA usually rebounds thanks to the group’s intense lobbying. Now, however, that’s no longer the case.

Navigator’s work, along with other surveys, show the NRA’s reputation has persistently plummeted since Parkland. Over half of Americans now report an unfavorable opinion of the NRA and its leaders, Wayne LaPierre and Oliver North.

Of course, this sounds pretty serious.

First, let’s take a look at Navigator Research. On its homepage, it describes itself as, “A credible, trusted message-development voice for progressives in policy debates, providing the best words, images, elements, phrases and frames to ensure progressives win the argument.”

In other words, this isn’t unbiased research. It’s research conducted by people who wanted to see the NRA’s support falter.

Additionally, the report in question is long on pontification, but short on details about methodology, how these 1,100 people were chosen, or what questions were asked.

This is important information, because if all 1,100 people come from major metropolitan areas where gun control is heavily supported, then the results would be very different than if all of them came from rural America where guns aren’t just accepted, but a significant part of the fabric of this nation. Plus, let’s be honest, some questions can be phrased in such a way that the respondents will answer in a way that differs from their personal beliefs. “Do you support background checks on gun sales?” is an example. Someone who says yes may mean they’re fine with the status quo, or it could mean they want universal background checks on all sales.

Without knowing what questions were asked or how the respondents were chosen, we have remarkably little reason to take these claims seriously. Yes, in some segments, the NRA is vilified. Yes, I’ll even concede that gun control has pushed forward in ways that we haven’t seen previously after shootings.

But is that universal?

Not necessarily. 1,100 people is a drop in the bucket in the United States, so without more details on just who these people are–and I’m not talking about names, but specifics about how they were chosen and what regions they come from–I see no reason to take any of this seriously.

What Mitch McConnell Said About the FBI's Raid on Mar-a-Lago Is Quite Disappointing
Townhall
Sebastian Gorka drops powerful video about what the FBI raid on Mar-A-Lago means for all Americans
Twitchy
Trump Attorneys Spill the Beans on Issues With FBI Raid, Warrant
Redstate
We've Got the Deep State on the Run. Here's What Needs to Happen Next.
PJ Media