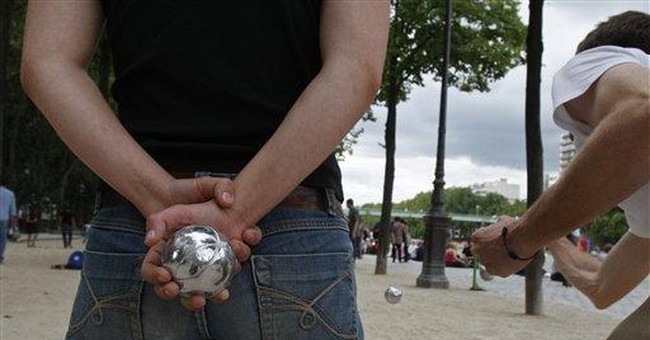 I’ve never heard of petanque before. It’s a cross between bocce and horseshoes. It’s not a particularly popular game on the world stage, but it’s popular in parts of France.

Why does any of this matter?

Well, it matters because some guys playing a game of petanque managed to stop a knife-wielding maniac’s rampage. They were successful because they had balls.

They only went out to play a calm game of petanque and enjoy some late summer warmth by a Parisian canal. By the end of the evening, the three friends had neutralized a knife-wielding attacker who had stabbed seven people, with an unlikely weapon: the game’s clanking — and hefty — metal balls.

Lobbing them in their dozens at the attacker and whacking him on the head with a wooden plank, they managed to bring the horror that befell the 19th district on Sunday night to an end. The attacker is now in custody and police are trying to piece together what happened and what the attacker’s motivations for his bloody rampage were.

Without the bravery of the three friends, and the normally-slow-moving steel globes, it could have been a lot worse. The area, after all, was full of revelers from a popular cinema complex, tourists and families. Two British tourists were among those injured

Luckily for everyone there, petanque player Boudjema Hamani and his two friends were on hand and ready to wield their own weapons of choice.

Of course, they wouldn’t have needed to throw balls at the guy if someone had been allowed to carry a firearm. A gun would have ended the attack far quicker and with less risk than some petanque balls.

I applaud these guys using what they had. A lot of people wouldn’t have, especially in this day and age, and they’re a prime example of how not all French are “cheese-eating surrender monkeys.” What they did took guts.

But this is Paris. This attack is hardly the worst violence Paris has seen. We all remember when armed terrorists basically shut down the city and left 130 people dead. It’s hard to forget on this particular day, the anniversary of 9/11.

France’s strict gun control makes it impossible for armed citizens to remain vigilant and to protect themselves from attacks with the most effective tools, so brave men are forced to improvise. However, they won’t always be successful. That’s something to think about as well.

Petanque balls may work against a guy with a knife, but a terrorist with an AK-47? Not likely, I’m afraid.

Luckily for us, we can be armed. Most of us, anyway. Even if we can’t carry concealed, we can at least defend our homes and neighborhoods if need be.

But in the worst case, one where there’s a threat, and you’re unarmed, remember that any weapon is better than no weapon. Even Petanque balls.