Cruz Hammers O'Rourke Over Gun Control, Forces Him To Claim To Support 2A 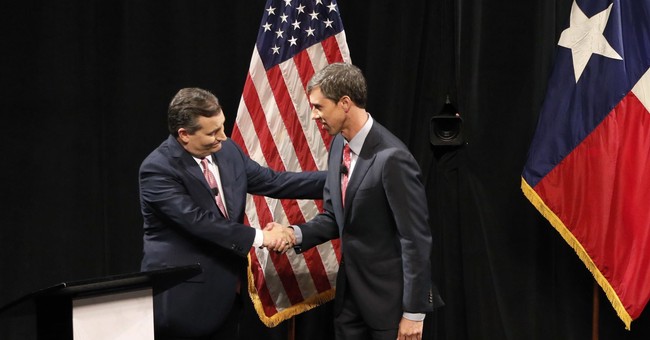 The race for the Senate taking place in Texas is one of the most interesting in the country. On one hand, we have Ted Cruz, a candidate for president who many figured had a legitimate shot at winning the GOP primary, now in a tough race to hold onto his Senate seat. On the other, we have a far-left progressive in a state that’s among the reddest of the red, and if one believes the primetime pundits, he also has a real shot at winning.

Friday night, the two went head to head in a debate that had Cruz hammer his opponent over gun control, an issue unlikely to play well in Texas.

During a heated exchange regarding the nomination of judges to the Supreme Court, Cruz asserted Democratic Rep. Robert “Beto” O’Rourke wants to elect “liberal judicial activists on the court” — a claim O’Rourke did not dispute.

“The justices that Congressman O’Rourke would insist upon, like Hillary Clinton, are justices who would undermine and effectively write the Second Amendment out of the Constitution,” Cruz said. “Those are radical views, and they’re not views consistent with the overwhelming majority of Texans.”

“Congressman O’Rourke … wants justices who would overturn [District of Columbia v. Heller],” Cruz continued. “Let me tell you the position of the dissenters — the dissenters in Heller said that no individual, no American whatsoever, has any right to keep and bear arms whatsoever … That’s what Congressman O’Rourke wants to see the Supreme Court doing — writing the Second Amendment out of the Bill of Rights.”

Look, the text of the Second Amendment is clear. “A well-regulated militia being necessary to the security of a free state, the people’s right to keep and bear arms shall not be infringed.”

O’Rourke wants to infringe all over that right. He can say he supports the Second Amendment until he’s blue in the face. It doesn’t mean he does.

I mean, I’m pretty sure Harvey Weinstein would have said he supported feminism. It doesn’t mean that he does or did.

It’s easy to say you support something and not mean it, especially when you’re running for office in a state where voters expect their officials to support that very thing.

But it doesn’t mean there’s any real support there. O’Rourke is as much of a Second Amendment supporter as David Hogg, Emma Gonzalez, Shannon Watts, or Michael Bloomberg. I don’t care what he claims to the contrary.

If he wants to change my mind, he has to show me something that supports the assertion.

I won’t be holding my breath.