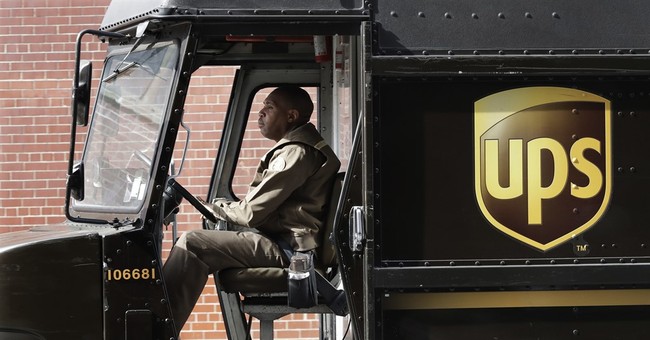 I think we can all agree that stolen guns are a problem. Any time firearms are stolen, we’re right to assume that those weapons will end up on the black market, likely sold to those who are legally barred from owning firearms due to felony convictions and whatnot.

Frankly, nothing good ever comes out of stolen guns.

Now it seems that somewhere in the neighborhood of 400 guns were recently stolen from a UPS facility in Tennessee.

About 400 guns have been stolen from a United Parcel Service facility in Memphis, Tennessee, and authorities are concerned about the theft’s potential effect on public safety in this city and elsewhere.

Two people driving a U-Haul truck stole the weapons from a UPS facility in Memphis on Sunday, the Bureau of Alcohol, Tobacco, Firearms and Explosives said Monday. The agency is asking for the public’s help in the case: It offered a $5,000 reward for information leading to an arrest and conviction.

Investigators are looking into exactly how many guns were taken, but the estimate of 400 stolen firearms makes it one of the largest single gun thefts the ATF has investigated, bureau spokesman Michael Knight said. ATF agents and the Memphis Police Department are reviewing manifests and bills to determine where the guns were shipped from and where they were going.

UPS said in a statement that it is working with law enforcement but does not comment on open investigations.

Such a high number of stolen guns could present a danger to the safety of the public and first responders in the west Tennessee city and elsewhere because they could be transported to other places within hours, Knight said.

The fact that the thieves used a U-Haul truck means there’s little to no chance of anyone noticing anything, especially if they transport them elsewhere. Seeing a U-Haul on the highway or interstate is about as innocuous as you’re going to find.

However, there are questions that I’d want answered if it were me. I’m sure the police are already asking these questions. First and foremost, how did anyone know there were that many guns in this facility and how did they know where to find them? I mean, a UPS facility has a lot of boxes. How did they know there was a pile of guns sitting there for the taking?

As I said, I’m sure the police are asking these same questions, assuming they don’t already have answers for them.

Again, no one likes the idea of stolen guns on the street. This doesn’t tend to work out well for anyone, but especially us. These guns may end up being used in violent crimes, which become statistics that anti-gunners will try to bludgeon us with to push through more draconian gun control measures, despite the fact that gun control doesn’t do anything to stop people like this.

If you know something, please contact the authorities. Not only is it the right thing to do, but it’s also the best thing we can do to cut the anti-gun arguments out from under them before they get a chance to use them.

Who Killed Ashli Babbitt
Townhall
Enemy of the people? Utah journo goes to paramedic's house to ask about his $10 donation to Kyle Rittenhouse
Twitchy
Conservative Women Are the Happiest People in America: Any Guesses Who's Unhappiest?
Redstate
Dr. Fauci Does Damage Control on Sunday Show Circuit After Getting Torched by Jim Jordan
PJ Media