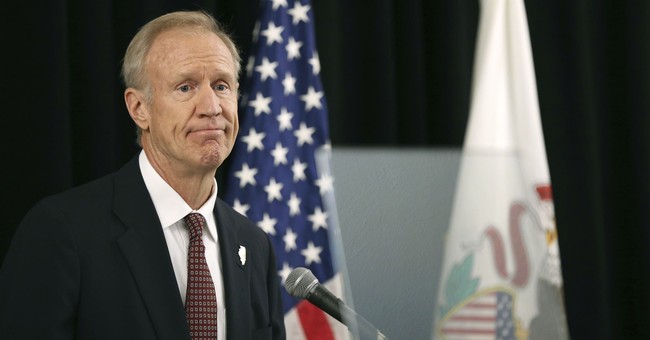 I’ve heard a lot of stupid arguments in my day and for a lot of different things, but I doubt very many will match the one a gaggle of Chicago parents is making. You see, they’ve filed a lawsuit. Their claim? Illinois Governor Bruce Rauner hasn’t done enough to stop guns flowing into Chicago.

You see, they’re arguing that this is a violation of children’s civil rights and the Americans With Disabilities Act.

Patrick spoke to reporters during a news conference in downtown Chicago announcing a innovative class-action lawsuit that claims that inaction by Republican Governor Bruce Rauner’s administration to stem the flow of illegal guns into the city infringes on the civil rights of children living there, and violates the American with Disabilities Act.

“We all know that crime guns are flooding into our city and killing our children,” Tom Geoghegan, one of the attorneys representing the plaintiffs, told reporters. “But it’s also destroying – emotionally, psychologically, in the most profound ways – the survivors, the children who are not left dead by this epidemic of violence.”

The lawsuit, which is not seeking any monetary damages, was filed with support from the Clarence Darrow Society, a left-leaning nonprofit organization based in Chicago. Rauner’s office and the State Police did not respond to requests for comment.

The plaintiff’s arguments are rooted in a growing body of research showing that children exposed to gun violence, even indirectly, suffer symptoms associated with post-traumatic stress disorder, including restlessness and anxiety, at levels similar to those who have fought in urban war zones.  These children are also prone to falling behind in school, performing poorly on cognitive assessments, and having greater difficulty concentrating or caring for themselves, the research shows.

The plaintiffs are wading into uncharted legal territory. They seek to prove that children exposed to violence suffer impairments so severe that the state must impose tougher rules on the businesses that supply guns.

It’s uncharted territory that doesn’t have a prayer in hell of going anywhere.

The Supreme Court has already ruled a couple of different ways that the government has no duty to protect individuals. I don’t see how this lawsuit is anything other than a demand that runs counter to those earlier findings.

Further, if anyone is responsible for the issues these children develop, it’s the maniacs running around Chicago shooting everything up.

What these people want is to force Rauner to push for even more gun control in Illinois, an already gun-hostile state. They don’t like the fact that as governor, he has the free will to act or not act on any issue he so chooses.

Of course, this isn’t the slam dunk one would think. These lawyers won a case against a suburb of Chicago and forced them to place more onerous regulations on a store reportedly known to sell “crime guns.”

That said, if these nimrods do win, this needs to be appealed. All the way to the Supreme Court if needed, because there is no way a lawsuit like this should completely shape policy when dealing with a fundamental right.