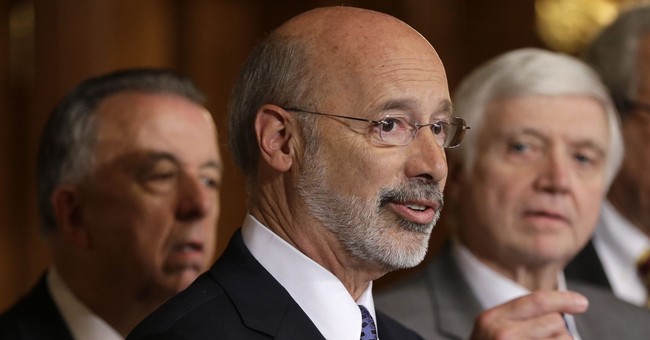 We don’t expect Democrats to protect our Second Amendment rights. We’re happy that some do, but as a party, we know how they feel about guns. Of course, these days, they seem to be trying to ramp up the anti-gun vitriol to 11.

All of which means the governor of Pennsylvania, a Democrat, saying he’ll immediately sign a new gun control bill isn’t shocking, though it is disappointing.

The measure that Gov. Tom Wolf is backing, HB 2060, was approved 131-62 by the Pennsylvania House last week and 43-5 by the Senate on Wednesday. The aim of the proposal is to pump up the existing surrender gun policy of convicted abusers in the Commonwealth and the Democrat vowed to sign it as soon as it hits his desk.

The bill would make those subject to a misdemeanor domestic violence conviction or a final Protection From Abuse order relinquish their guns and ammunition to police or a gun shop within 24 hours of a hearing. Current law, which allows more judicial discretion on ordering surrenders, grants a 60-day window and the ability for those subject to such surrender orders to give their arms to a third-party, such as a friend or family member, to hold. An amendment by state Sen. John Eichelberger, R-Blair Township, to continue to allow friends to hold guns was defeated 39-9. Those who don’t comply face two years in prison and a fine of as much as $5,000.

Second Amendment groups argue that spurious orders have in the past been filed vindictively and that gun owners can easily lose their firearms and right to keep and bear arms pending lengthy legal appeals and, even if they get their guns back, could leave them on the hoof for thousands in storage fees. Further, they point out that police could sell guns stored with them after a year as surplus property and keep the money.

On the surface, this looks like a no-brainer, but the Second Amendment groups are right. There’s no way this is remotely right.

This bill is what passes for “common sense” gun control. To make matters worse, this is one of the more common sense proposals.

I’m not saying it’s common sense, mind you, only that it looks more rational than most of the proposals flying around these days. However, there are major problems.

After all, if I lose my guns because of a false accusation, and those accusations continue for a year, all my guns could be sold? Seriously? I mean, I have some with sentimental value that can’t be replaced no matter what. The SKS my father brought back from Vietnam is just one example. How can losing something like that be compensated for?

And that’s assuming you ever get your rights back.

Let’s be honest, the list of things that qualify as domestic violence has grown beyond the idea of beating your wife and now a single misstep such as throwing a dish against a wall that shatters, with a shard flying and hitting your partner halfway across the room, can qualify. Somehow, that doesn’t seem remotely right.

These are people’s civil liberties we’re talking about here.

But it’s not like Wolf or his fellow travelers think or care about that. At all.

Bill Maher Knows Where Progressives Are Going to Blow It on Abortion
Townhall
Kamala Harris' tweet pandering to 'women who are afraid' with Roe overturned even pisses the LEFT off (plus HILARIOUS Photoshops)
Twitchy
'Mostly Peaceful' Abortion Rioters in LA Attack Police, Including With Makeshift 'Flamethrower'
Redstate
[WATCH] One American Gun Manufacturer Is Fighting Back Against the Left's Wrath
PJ Media