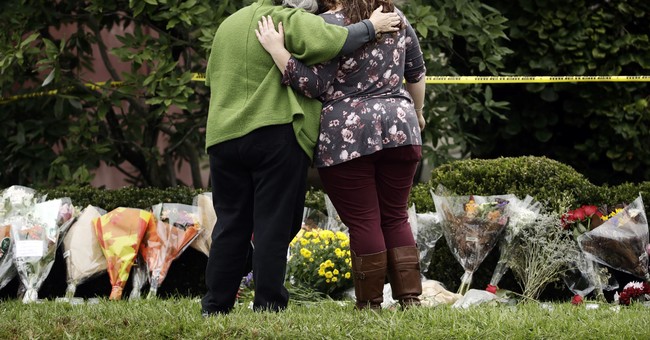 New York City has a well-earned reputation as the most anti-gun city in the world. It’s almost impossible for the average citizen to even buy a gun legally, much less get a permit for carrying one.

However, it seems that the borough president of Brooklyn isn’t completely clueless. Following the massacre in a Pittsburgh synagogue, he’s calling on off-duty police officers to carry their firearms in their houses of worship.

As the nation reeled from Saturday’s synagogue shooting in Pittsburgh, the borough president of Brooklyn — whose county is home to more Jews than any other in the country — said on Sunday that he would begin carrying a gun whenever he attends religious services.
“From now on,” said the borough president, Eric L. Adams, a retired captain of the New York Police Department, “I will bring my handgun every time I enter a church or synagogue.”

Mr. Adams, a Democrat and 22-year veteran of the Police Department, made his remarks at a news conference outside a Jewish family services center in the Midwood neighborhood, home to one of New York City’s highest concentrations of Orthodox Jews.

The Police Department already instructs active officers to carry their service weapons while off duty, with few exceptions. Retired officers are allowed to carry concealed weapons under federal law if they pass a marksmanship test.

Mr. Adams, who spoke outside Ohel Bais Ezra Children’s Home and Family Services Center, urged off-duty officers to bring guns when they attend religious services, and said they would be an “extension” to the on-duty officers that already protect many houses of worship.

Not everyone agreed with Adams, though.

Mayor Bill de Blasio and others, for example, would rather see anything other than a gun in the hands of a good guy that would provide the necessary security.

However, Adams wasn’t alone either.

And Rabbi Jonah Dov Pesner, director of the Religious Action Center of Reform Judaism, said in a statement, “Our synagogues cannot become bunkers.”

But some Jewish leaders in New York said that they would feel more secure knowing that an attacker entering a synagogue would face someone with the power to stop them.

Assemblyman Dov Hikind, a Democrat of Brooklyn and a fierce advocate for Jewish interests, said that New York was home to plenty of Israelis with military training who could be deployed to secure synagogues.

Mr. Hikind said that he himself sometimes feels unsafe at his own synagogue.

Now, don’t get me wrong, I think it’s sad that people feel unsafe in their houses of worship. The one place someone should feel as safe and secure as possible isn’t all that safe and secure these days.

But putting your head in the sand and pretending that because something shouldn’t happen, it won’t happen, is stupid. It’s a good way to find out the hard way that reality doesn’t give a damn about wishes and hopes. To quote a certain movie dean, “Fat, drunk and stupid is no way to go through life, son.”

This is especially true for those who refuse to face the reality that maniacs will always exist, and they’ll continue to get weapons to use against the innocent. The only hope is armed good guys ready to put up a fight.