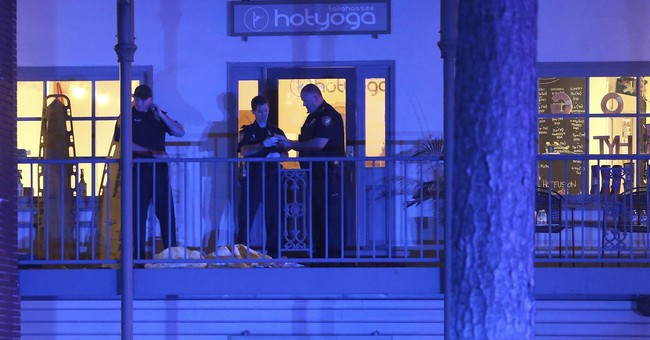 Anti-gunners love to look at the results of a mass shooting and declare that the individual who conducted the atrocity shouldn’t have been able to buy that particular weapon. This is especially true if the weapon is one of the oh-so-evil assault weapons.

Undoubtedly, anti-gunners in Florida are saying it right now after a deadly mass shooting at a Tallahassee, FL hot yoga studio.

A gunman killed two people and wounded five others at a yoga studio in Florida’s capital before killing himself Friday evening, officials said.

Tallahassee Police Chief Michael DeLeo told reporters Friday night that the man shot six people and pistol-whipped another after walking into the studio, which is part of a small Tallahassee shopping center.

The suspect then fatally shot himself, DeLeo said.

Early Saturday morning, the Tallahassee Police Department identified the shooter as [Redacted because we aren’t going to help make these tools famous], 40.

The department identified the two people who were killed as Dr. Nancy Van Vessem, 61, and Maura Binkley, 21.

I wish these shooters could have a dyslexic moment and off themselves before they turn the gun on others. It might make a bit of a mess, but no one else would be hurt.

However, it appears that at least this time when anti-gunners claim the killer shouldn’t have been able to buy a gun, they might be right, though not for the reason they might think.

From The Truth About Guns:

It isn’t clear whether any of the victims were specifically targeted by the shooter, who were both associated with FSU, but he’d been arrested a number of times for harassing people on and near the campus. Despite the arrests, though, prosecutors dropped charges in at least four prior cases against him.

The killer had at least two arrests for battery where he grabbed women’s buttocks, which sounds more like a form of sexual assault than anything else. Again, he wasn’t prosecuted.

As noted over at TTAG, it’s unlikely that if he’d been prosecuted for these crimes–and, of course, convicted–he’d have been ineligible to purchase a firearm in the first place. Since authorities believe he legally bought his gun, that matters. No, they weren’t felonies as listed, but it’s still possible something could have been done that would have barred him from buying a weapon.

Look, I despise pretty much every gun law on the books anywhere in this great land of ours. There’s not one I support, but let’s also be real here. There’s absolutely no point to gun control laws that bar people from buying guns for criminal convictions if prosecutors aren’t going pursue charges against someone with a history like this.

I mean, I could see letting the first charge slide, but after that? Seriously?

Of course, the mayor of Tallahassee is currently the Democratic nominee for governor in Florida, and he’s taking a strong anti-gun stance in his campaign. I fully expect him to somehow spin this to try and help his campaign because that’s what people like him do. They build soapboxes out of the bodies of the dead.

And then label us heartless for offering “thoughts and prayers.”