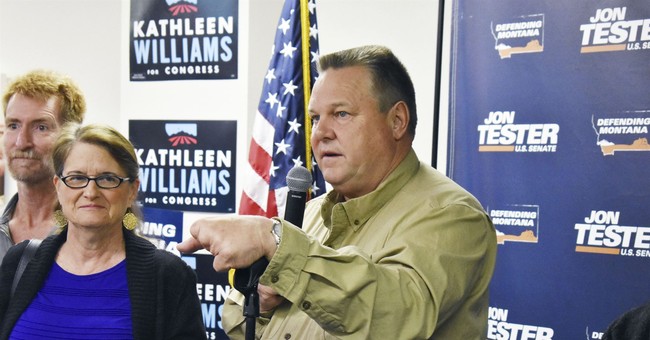 John Tester is a Democrat who likes to appear as if he’s a friend to gun owners. However, he’s a prime example of the phrase, “With friends like these…”

Tester is a supporter of universal background checks. These aren’t popular with gun owners for a lot of reasons.

Lucky for Tester, he’s got PolitiFact in his corner.

Politifact quoted Republican Matt Rosendale saying Tester believes “believes that we should have a national registration so that the people of Montana should have to ask permission before they purchase a gun, ask permission from the federal government.” Politifact suggested Rosendale’s claim was so outlandish that it merited the label of “Pants on Fire,” as in liar, liar, pants on fire.

The need for a registry would be applicable whether we were talking about firearms or apples.

I can’t really disagree with Breitbart‘s AWR Hawkins on pretty much anything he’s pointed out here. While universal background checks don’t automatically mean gun registration, they’re pointless without a gun registry to determine who has a gun when the scheme goes into effect.

As for PolitiFact, though, let’s keep a couple of things in mind.

For one, it’s arguing that background checks aren’t asking the government for permission. However, when the government can say “no,” then guess what? You’re asking for permission. The fact that the answer is almost always “yes” doesn’t change that fact. If my daughter asks for a juice box, I pretty much always tell her, yeah, but that doesn’t change the fact that she still has to ask.

Had PolitiFact taken issue with the phrasing but at least acknowledged that many of us on this side of the aisle see background check approval is little more than governmental permission, it’d have been forced to label this one differently. After all, it’s not a lie if you believe it with all your heart, now is it? Especially when it’s true.

But PolitiFact is clearly not interested in that. It’s more interested in pushing its own opinions as facts so it can hopefully sway the election in a direction it prefers.

Well, I’m going to call PolitiFact out on it.

More than that, I’m going to point out that it knows damn good and well what Rosendale said, what he meant, and that he’s not exactly wrong, even if it disagrees with the characterization of it. Yet, despite that, its decision to label his comments “Pants on Fire” is nothing more than projection.

Someone is lying, but it’s not Rosendale.