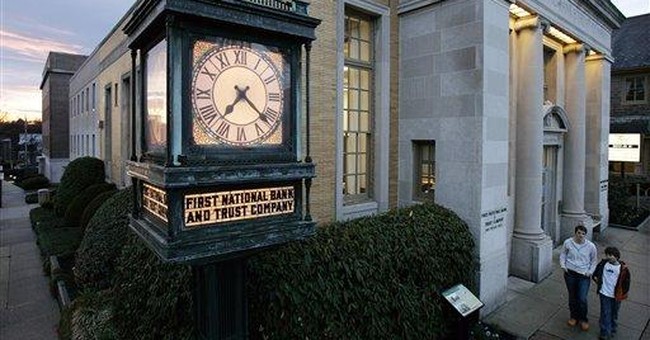 The supposedly scandal-free Obama administration did some really shady stuff. Besides Operation Fast & Furious, one of the big examples was Operation Choke Point. The measure sought to throttle industries President Obama failed to approve of, including the firearm industry.

Even today, we may still be seeing some of the fruits of that effort as we watch countless financial companies sever ties with companies that haven’t been accused of wrongdoing.

New documents reveal just who was running the operation for the Obama White House, and it’s not who you might have thought.

Last week brought new revelations regarding Operation Choke Point, the Obama administration’s effort to freeze politically disfavored businessesout of the financial system. Rep. Blaine Luetkemeyer (R-Mo.), who helped lead a multi-year effort to shut the program down, highlighted some of theses newest findings and pointed out that stopping Operation Choke Point is not a partisan issue.

Luetkemeyer’s legislation to prevent a redo of Choke Point – The Financial Institution Customer Protection Act of 2017 – overwhelmingly passed the House, with only two nay votes. Operation Choke Point was an egregious affront to the rule of law, so it is good to see that so many lawmakers want to prevent a repeat.

For those unfamiliar, Choke Point consisted of bureaucrats in several independent federal agencies taking it upon themselves to shut legal businesses – such as payday lenders and firearms dealers – out of the banking system. Given the nature of the U.S. regulatory framework, this operation was easy to pull off.

Officials at the Federal Deposit Insurance Corporation (FDIC), for instance, simply had to inform the banks they were overseeing that the government considered certain types of their customers “high risk.” The mere implication of a threat was enough to pressure banks into closing accounts, because no U.S. bank wants anything to do with extra audits or investigations from their regulator, much less additional operating restrictions or civil and criminal charges.

Banks are incredibly sensitive to any type of pressure from federal regulators, and they know that the regulators have enormous discretion. The new revelations are quite scary because they show exactly what federal regulators can do with that discretion – even to law-abiding citizens. As Rep. Luetkemeyer points out:

In one example of blatant intimidation, a bank terminated its relationship with a legal business after threats from the FDIC. The bank eventually surrendered to the pressure, and when the bank notified the FDIC of the decision, they admitted that a risk assessment showed the business “pose[d] no significant risk to the financial institution, including financial, reputation, and legal risk,” yet they still terminated the banking relationship.

For years, Office of the Comptroller of the Currency officials have continually denied any wrongdoing, yet in the newly-unsealed documents we see proof of a conscious decision to work in conjunction with the FDIC against payday lenders.

However, payday lenders were far from the only ones dealing with this kind of fallout. The firearm industry has had to deal with this too, and things have only intensified since the Parkland massacre as progressive lawmakers have sought to push even harder on the financial industry.

After years of Operation Choke Point, followed by New York Gov. Andrew Cuomo’s personal attacks against the firearm industry by threatening banks with new regulations–threats that work because of where these banks are headquartered–it’s not a surprise that many banks are cutting off gun-based businesses.

This kind of crap needs to stop. Law-abiding businesses don’t need to be shut down through mischief by regulators. You either pass a law or you leave them alone. It’s that simple.

The fact that they didn’t pass anything, though, is because they know this is BS.

Heads need to roll over this one. They really do.

Mexico vows to appeal after US judge shoots down lawsuit against gun makers
Oct 03, 2022

DeSantis Is History’s Greatest Monster For Some Reason
Townhall
David French SO upset over tweet from The Blaze's Todd Erzen he called to TATTLE ... it did NOT go well
Twitchy
Ron DeSantis Schools CNN Reporter Pushing Misleading Hurricane Narrative
Redstate
The Morning Briefing: Biden's Last Brain Cell May Be the Death of the Republic
PJ Media