The Violence Against Women Act is one of those things you expect the Democrats to back. They always have in the past and they’re the ones who have been pushing to reauthorize it this time around. It’s not difficult to understand why, either. Most people really only know bills by their names, if that, and they don’t look deeper, which means something called the “Violence Against Women Act” is a slam dunk with the public.

However, there are things in these bills which can be problematic for a lot of people. The title isn’t everything.

The thing is, a lack of things in a bill can be a problem, too, apparently. That’s why Speaker of the House Nancy Pelosi is sitting on the Violence Against Women Act for the time being; because of what’s not in there.

Stay-at-home orders to help contain the spread of the novel coronavirus have spurred fears about a wave of domestic violence, but the Violence Against Women Act, a key federal law on the matter, lapsed more than a year ago during a gun control debate.

Republicans said the idea needed more study, and the law lapsed during the stalemate.

“Simply put, Republicans are willing to almost unanimously approve a clean reauthorization. Democrats want to load it up with all kinds of controversial provisions that probably couldn’t pass on their own,” said Thomas Jipping, deputy director of the Center for Legal and Judicial Studies at The Heritage Foundation.

Democrats said Republicans blocked a bill that had bipartisan support without offering an alternative.

Which they actually did. They supported keeping the law as is.

For Democrats, though, that’s the same as not offering an alternative. Then again, in their minds, they’re the ones calling all the shots and the Republicans just need to roll over and take it.

No, that’s not projecting.

“Our calculation was that we’re in charge now, we can pass a bill that we think is a comprehensive bill to protect all women,” said House Majority Leader Steny H. Hoyer, Maryland Democrat. “I’m hopeful that the Senate will take it up or ask to go to conference on it.”

One problem with the so-called “boyfriend” provision is that it opens a can of worms that has no business being opened. For example, when is someone a boyfriend or not? What if, on a first date, a girl gets angry and begins acting out. The guy tries to restrain her–maybe he’s worried about her hurting herself or him–but now he’s charged with assault for grabbing her. Does he count as a boyfriend?

If so, this one date has ruined his ability to own a firearm forever under the Democrats’ plan.

So no, that provision isn’t needed, and the fact that Pelosi isn’t willing to reauthorize the bill as is tells us that it’s not really about violence against women. It’s about adding gun control provisions and expanding the list of people who are prohibited from buying guns. She doesn’t care about women, she cares about eroding our Second Amendment protections to the point they’re non-existent.

Meanwhile, folks like me want these women armed so not only will they not be abused by their partners, but by criminals or anyone else who would want to hurt them.

Tell me again who is being anti-woman? 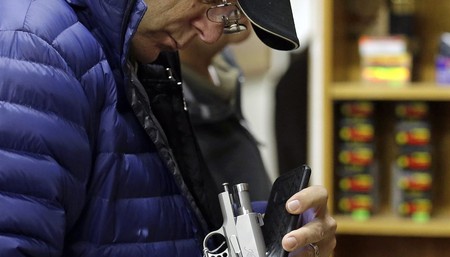 Here's How You Know Democrats Rigged and Stole the 2020 Election
Townhall
John Noonan shares a wonderful story about Bill Murray's brother -- the real 'Noonan' from 'Caddyshack'
Twitchy
Can We Put Pelosi out to Pasture Already for What She Just Did to Willie Mays?
Redstate
Canadian Pastor Swarmed and Arrested by 'SWAT' Team for 'Inciting' People to Attend Church
PJ Media