Over the last few months, it’s seemed that everyone wants a gun. That’s why gun sales are so ridiculously high at the moment. It’s kind of insane, really, but at least the so-called “Trump Slump” appears to be over. For now, anyway.

However, it’s not just the law-abiding that are looking to get their hands on firearms.

As per usual, criminals want guns as well. They never stopped, to be fair, but it seems even their demands are increasing. Of course, it’s difficult to tell for certain since they don’t undergo NICS checks to buy their guns, but there is a bit of information that suggests someone on that side of the law wants guns pretty bad.

Thieves stole more than 1,000 firearms from gun stores across the country in just over one week this spring, according to the Bureau of Alcohol Tobacco Firearms and Explosives. The ATF says thefts of gun stores are on the rise.

To put that in perspective, that haul between May 28-June 5 would have accounted for nearly one-fifth of the roughly 5,600 guns reported stolen in all of 2019.

Thomas Chittum, ATF deputy director for field operations, says a lot of that appears to be tied to unrest around the country in the wake of the police killing of George Floyd.

“The spike was marked,” he said. “It was the most gun store burglaries in a short period of time that I have ever seen, that ATF has ever seen.”

Chittum’s agents are investigating more than 90 thefts or attempted thefts from May 28-June 5 alone.

While it’s obvious that there’s a link, no one really knows just what that link actually is.

For example, it could be a case of opportunistic thieves recognizing that the police were otherwise occupied and deciding they would make a good score with a much-reduced chance of getting caught. It could also be people who opted to steal guns for the “revolution” they so desperately want.

Most likely, it’s the former rather than the latter. While I don’t think for a minute that any of the so-called revolutionaries running around our American cities over the last couple of months are incapable of considering something like this, I think they’re incapable of actually doing it successfully.

Criminals, however, have been doing this kind of thing for years, so we know they can pull it off.

To be sure, there have been some arrests along the way, but not nearly enough. This is the flip side of what happens when the entire country is burning. The people who talk about wanting to keep guns out of the wrong hands join up and make it just that much easier for criminals to get guns. Nicely done, you jackwagons. Nicely done, indeed.

And make no mistake, those protesting and their allies elsewhere are among the very people who push for gun control. Yet, as we’ve noted, they’ve been pretty silent about much of this.

Not that we should be surprised.

Still, a bunch of guns out on the black market is a problem for all of us. Here’s hoping a lot more arrests are made and very soon. 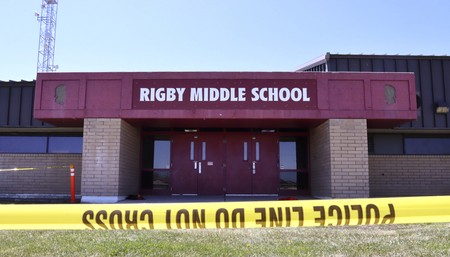