Left Thought Conservatives Would Freak Over Black Gun Owners. They Were Wrong

For ages now, some in Democratic circles have sworn up and down that the best way to get the right to support gun control was to have legions of black gun owners.

You see, in their mind, the right only sees gun rights existing for white people. Minorities shouldn’t bother.

Except, that is USDA Grade “A” Prime male bovine excrement. No one on this side has ever believed that way. We may not agree with the things an armed black man or woman might be saying–then again, we might–but I’ll always stand in favor of their right to keep and bear arms, even against Republicans who suggest otherwise.

“Gun ownership among Black Americans is soaring,” notes a headline in The Hill. So what? Why does the story come accompanied with a story of what is obviously meant to appear to be a scary paramilitary group of blacks? Are we supposed to think that black Americans who buy guns lawfully are going to organize themselves into roving bands of troublemakers? This fear is farfetched when it comes to white-nationalist militias and I see no reason to think that black-nationalist militias are something to lose sleep over either. Black Americans are legally buying guns for the same reasons Americans are legally buying guns: They don’t trust their government to look out for them. This fear is understandable.

Noted in the National Review story is that many liberals rejoiced at the story, figuring that now we’d start to see gun control support from the right. After all, this has long been their thinking. 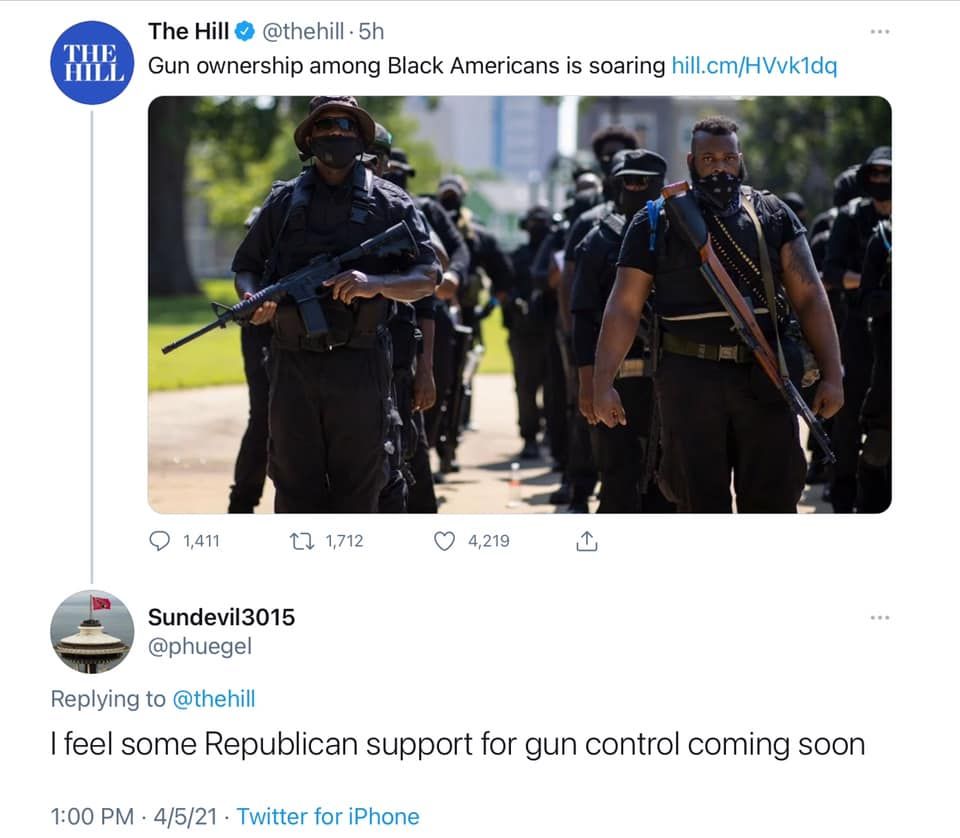 I hate to break it to Sundevil3015, that’s not really how most of us view gun rights.

See, black men are the people statistically most likely to be shot and killed. Yes, many of those happen to be involved in gang activity, but many others are either bystanders or are unfortunate souls who confront criminals and get shot for their trouble. They’re good, decent people who should have the means to defend themselves, but often live in communities where that’s discouraged or even illegal.

For me, I want to see every law-abiding citizen armed, both inside the home and outside of it. If all the good guys have guns, the bad guys have much more limited options, and violent crime all but vanishes. It won’t disappear completely, because that’s not human nature, but it will be such a pathetically low amount that it won’t even matter.

But black gun owners? For them I just want to know one thing: Where are you getting your ammo? I need some bad!

Was a Texas mass shooting averted with a phone call instead of a red flag law?

What's With the Democrats' Abortion Obsession?
Townhall
Megyn Kelly explains why a 'first-year law student' could have driven a truck through holes in Cassidy Hutchinson's testimony
Twitchy
Things Get Awkward When Jake Tapper Asks Jamie Raskin for Confirmation of Hutchinson's Story
Redstate
Dr. Fauci Took Some of His Own Medicine, and It Didn't Go Well
PJ Media