Columnist: If Guns Went Away, Criminals Would Use Something Else

Good guys like to use guns for protecting themselves and others for one very simple reason. It’s just the best tool out there for stopping a bad person from doing a bad thing to a good person.

However, bad guys like guns because they’re the best way to do bad things to good people.

The thing is, if guns went away, bad guys would still do bad things to good people. They’d just pick up another tool

That’s something columnist Diane Dimond addressed in her latest column.

The White House is launching a new assault to bring down the crime rate. As you’ve likely heard, crime, especially homicide, has exploded in many major hotspot cities over the past year or so. President Joe Biden says he knows what to do, he’s been at this for years and he’s got a plan ready to launch that includes several definitive steps.

“The first of those that work is stemming the flow of firearms used to commit violent crimes,” Biden told a group of reporters as he was about to go into a closed-door meeting with visiting police chiefs and city officials. “It includes cracking down and holding rogue gun dealers accountable for violating federal law.”

The new plan includes five new federal strike forces, agents with the Bureau of Alcohol, Tobacco, Firearms and Explosives (ATFE), which will embed with local police departments in Chicago, New York, Los Angeles, San Francisco and Washington, D.C. Their mission is to disrupt gun trafficking coming into those major cities.

The cold hard fact is this: There are some 470 million guns in civilian hands in the United States right now, with new ones — including untraceable, homemade ghost guns — being manufactured every day. Legal, registered gun sales are at record highs. If by some stretch of the imagination we could magically do away with all the guns belonging to criminals, what do you think might happen? Do you believe hardcore lawbreakers would simply shrug, walk away from their criminal life and go get a nine-to-five job? No. They would find other weapons with which to inflict their terror on innocent citizens. Knives, Molotov cocktails, scissors, an ax perhaps. Criminals aren’t just violent; they are deviously creative.

That’s precisely what would happen.

After all, we’ve seen it happen. In the UK, they put a ban on guns and eventually got rid of enough of them that criminals had a hard time obtaining them. Violent crime, however, didn’t end. Instead, it increased because criminals knew their targets didn’t have guns. Rather than firearms, though, they used knives.

Now, the UK is trying to heavily restrict knives as much as they can get away with it, even talking about taking the points off.

Even that won’t stop the bad guys. They’ll just move over to something like hammers, next.

Only a fool would believe that anything different would happen in the US. The only alternative I’d accept is someone pointing out how it’s virtually impossible to make criminal guns vanish so the whole thing is a waste of time discussing because, well, that’s also true.

Criminals aren’t going to just roll over because all the guns are gone.

What will happen, though, is that good, decent, law-abiding people won’t be armed anymore and will be at the mercy of those criminals like never before. While previously, they could have drawn their own weapons and protected themselves, that’s not likely to happen after a gun ban.

Of course, I’ve long wondered if that wasn’t really the point.

We Need To Address The Claim Guns Are Killing People 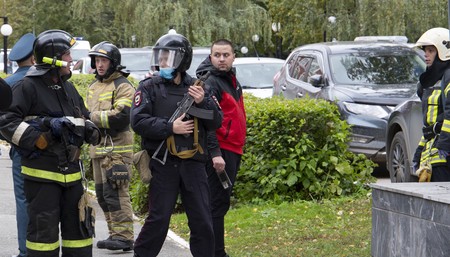