The Onion used to be funny. After all, they poked fun at anyone and everyone, making people laugh in the process. The only thing funnier was the people who thought the headlines were real.

Then again, in this day and age, it’s difficult to keep satire from becoming precognitive.

Over at The Babylon Bee, they keep making ridiculous satirical headlines that end up popping up at CNN or the Washington Post a couple of months later.

But The Onion doesn’t have that problem. Instead, they’ve lost their funny because they’ve decided to pick a side in the culture war.

Recently, they decided to try and have some fun regarding San Jose’s new law requiring gun liability insurance. This is the best they could come up with: 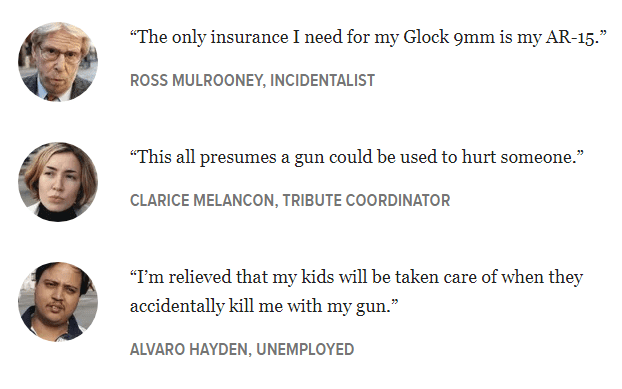 See, I don’t actually expect The Onion to delve into the nuances of political debate. They’re a satire site, after all. It’s not what they do.

But what I do expect–or, more accurately, what I should be able to expect–is at least poking at both sides. Look at those three lines. Now, tell me which narrative is being advanced.

If you can figure it out, let me remind you to breathe, because I’m sure you need help figuring that out, too.

This bit is a common one for The Onion. Three fictional people providing ridiculous comments about a given topic. If you don’t want to advance a narrative, you simply do one from either side of the issue and one that pokes fun at those who don’t have a position.

But that’s not what happened here.

Instead, all three are poking at the pro-gun side without any attempt to understand that there are serious issues with San Jose’s law.

Once upon a time, I was a fan of The Onion. They had some funny stories. Here’s my all-time favorite, mostly because I was in the SCA at the time I read it.

Yet in recent years, The Onion has taken more and more of a partisan lean in their work. As a result, it’s alienated a lot of people like me.

That’s why The Babylon Bee has done so well, actually. It’s taken a role that The Onion used to fill, namely satire that doesn’t treat conservatives and libertarians as either evil or idiots. Oh, they poke fun at the right some–not enough to appease some folks, but they do poke at us, too–but not to the exclusion of ragging on the left.

But The Onion no longer cares about any of us as fans.

At some point, I expect they’ll be begging for money and complaining about declining readership, assuming they haven’t already. When it does, just point to stuff like the crap above and remind them that they already made it clear they picked a side in the culture wars, and since they’ve made it clear they don’t value your patronage, you don’t value their existence.

More evidence for evil than insanity in Buffalo shooting?