Sinister move by ATF should serve as warning

I’ve often talked about the animosity many in the gun community feel toward the ATF. It’s a real thing, after all, and the ATF doesn’t seem to care very much about how they’re perceived. Sure, they’ve tried to bust a few supposed myths, but beyond that? They’re not doing much to improve their image.

Then again, it doesn’t help when they decide to overstep their bounds.

It seems that at least some gun stores are receiving the following letter from the ATF: 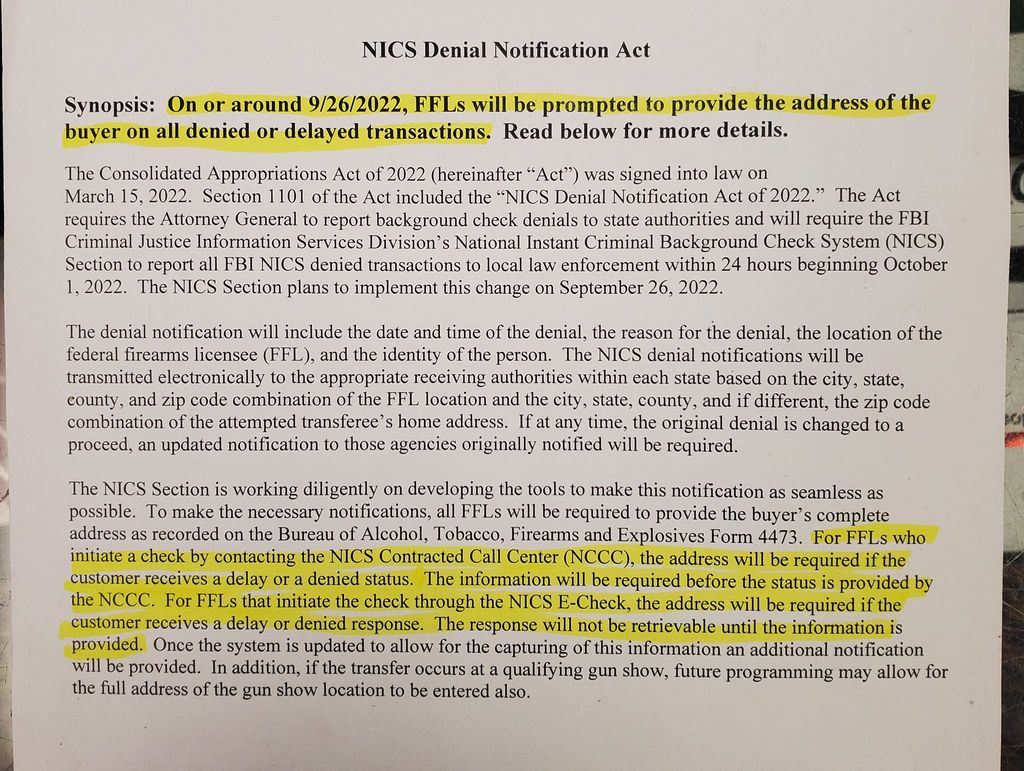 Now, the law they’re citing does indeed require gun stores to report all denied NICS checks. This is one of those things that few people really have an issue with in the grand scheme of things. After all, a denied check is grounds to at least see if the individual in question is a criminal trying to commit an illegal act.

If it’s not, then hopefully whatever led to the denial can be fixed.

But as the letter notes, the ATF is demanding contact information for delayed NICS checks.

For the uninitiated, this may make perfect sense. After all, we don’t know if those delayed checks are criminals trying to buy guns or not.

Except, that’s literally not how the law works. A delayed background check is supposed to be treated as a passed check. Further, according to a couple of gun store owners and employees I’ve spoken with, something like 95 percent, at a minimum, of all delayed NICS checks are people with no criminal history. The system just created a delay for some unfathomable reason.

And let’s also note that the letter does even differentiate between a two-day delay where the check comes back clean and one where there’s never a return at all. In other words, if you have a delay of a single day when trying to buy a gun, the ATF wants your information sent to them just as if you were a convicted felon trying to buy a firearm.

Taken in a vacuum, this is extremely problematic and worrying.

However, it’s also not the only thing we’ve seen out of the ATF of late that should raise our levels of concern. For example, let’s not forget the gentleman in Delaware who had agents come to his home demanding to see if he still had firearms he lawfully purchased without even probable cause he’d done anything illegal. There’s video of the interaction, so it’s not just an accusation.

Then we’ve got the ATF agent who took photos of sales records at a gun store, also captured on video.

These three instances suggest that we’re watching the ATF declare war on gun owners. Couple that with the federal government’s focus on firearm accessories like holsters and scopes in the Commodity Flow Survey, and it shows that this isn’t just an agency trying to run amok.

No, this looks and smells an awful lot like a federal government that’s interested in knowing exactly who bought guns and where to find them.

That’s basically all a gun registry is.

As we’ve said before, the purpose of a gun registry isn’t to combat crime. It isn’t to root out gang members and drug dealers. It’s ultimately a tool that’s only useful for those wishing to confiscate firearms and the Biden administration sure as hell looks to be setting up exactly that.

Now, I don’t want to be concocting a conspiracy theory or anything, but this isn’t just a rumor. This isn’t a few guys reporting something on the internet and people losing their minds over it.

No, these are documented instances with evidence anyone can look at and examine themselves.

Taken individually, any of these could be troubling, but might also be explained away somewhat easily. Taken in totality, though, it’s much harder to do that.

With this latest thing, some advice a gun store employee passed along which I happen to think is good is that if you live in a state where your carry permit can be used to bypass the NICS check, use it. If you’re in a constitutional carry state and don’t need a permit, get one anyway for that purpose if nothing else.

No background check, no delays.

In the meantime, we’ve got a problem with the ATF and it needs to be addressed.