With more than 1.8-million concealed carry holders in the state, you might have assumed that every Floridian who wants a firearm has already purchased one, but new background check numbers for the state make it clear that there are plenty of Floridians who’ve picked up a gun for the first time in their lives over the past couple of weeks.

That’s compared to the 2,600 plus it ran on the same day last year. That’s nearly a 400 percent increase.

The state points to the coronavirus as the reason why.

The Florida Department of Law Enforcement doesn’t know how many guns were sold in that period.

It tracks background checks, but not actual gun sales.

The Miami Herald reports that gun retailers in the state have never seen anything like this, including during previous hurricanes or even the post-9/11 buying surge. Retailers themselves say many of the customers walking into their stores are strangers, not regulars looking to pick up a little more ammunition or another firearm for their collection.

“Our sales are up 80 percent, with a huge increase in first-time buyers who are worried about martial law, economic collapse, unemployment, shortages, delinquents roaming the streets,” said Alex Elenberg, manager of Charlie’s Armory on West Flagler Street. “If you can’t defend your house and your family, what good are you?”

“I think it’s a little too knee-jerk on the part of consumers, just like the toilet paper hoarding,” said Jorge Corbato, owner of Nebulous Ordnance Defense in Miami. “Do you really believe this virus is apocalyptic?”

Do I believe we’re looking at the beginning of civilizational collapse? No, but we could be in for a rough few months, and I don’t rule out the possibility of increased unrest and more common crimes like burglaries and home invasions. I hope that doesn’t happen, and I’m not certain that it will, but I wouldn’t be shocked to see a rise in violent crime if lockdowns continue for a prolonged period.

Other gun store owners in Florida say they’re seeing a large number of older customers come through their doors.

Like many other sellers, Samuel Rivera is running out of inventory at his Gunaholic shop in Hialeah. With sales up 60 percent, his stock of 100 handguns is down to 18. He placed four orders last week but his sold-out distributors don’t know when they’ll be able to replenish.

He’s selling to more women and senior citizens than usual, and is also doing brisk business in tasers, pepper spray and bulletproof vests. He refuses to price gouge, although he’s seen other stores raise prices — charging $25 for a 50-round box of 9 mm bullets that should cost half that.

“The women and the elderly are tired of being victims, and afraid of getting robbed at the ATM or scammed at home,” Rivera said. “I’m not worried about violence and I try to calm all my customers down. I tell them, it’s not like Venezuela. Fighting over toilet paper and Purell — that’s silly panic.”

Charlie Berrane, owner of Charlie’s Armory and the Warrior Gun Range and Gun Shop, said customers want to be prepared for mayhem.

“We don’t know where the virus will lead and we don’t know if we’ll be able to depend on our law enforcement officers to respond,” Berrane said Tuesday, monitoring the line outside his Doral store. “People want to be more self-reliant.”

Only three handguns were left in the display cases at Charlie’s Armory on Monday evening, and some ammo shelves were empty.

I think Berrane is right about what’s driving the current surge in gun sales. It’s not panic. It’s uncertainty. We simply don’t know what our world will look like in a couple of weeks, and people not only want to be more self-reliant, they want to be prepared. 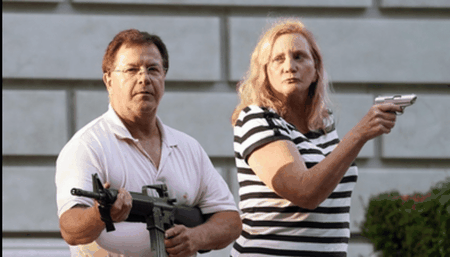