There’s going to be a lot of ink spilled and theories offered about how Republicans were able to pull off what was thought to be nearly impossible in Virginia on Election Day- victories for all statewide candidates and the retaking of the House of Delegates, which was lost to Democrat control two years ago.

And in reality, there’s not a single reason why Governor-elect Glenn Younkin, Lt. Gov.-elect Winsome Sears, and Attorney General-elect Jason Miyares were able to defeat Democrats like Terry McAuliffe. There were a lot of factors that led to record-high turnout for Republicans, but one that absolutely should not be ignored is the impact that Second Amendment sanctuaries had on the elections.

As I wrote on Election Day while the polls were still open, the Second Amendment Sanctuary movement swept across Virginia in the wake of the 2019 elections, which saw Democrats take control of the state legislature for the first time in nearly three decades. The top priority for the new Democratic majority was gun control, which led to an immediate backlash in the vast majority of counties. Tens of thousands of gun owners turned out at their county supervisors’ meetings to demand the passage of 2A Sanctuary resolutions and ordinances, and while the movement may not be making headlines in Virginia anymore (well, at least not until now), those gun owners didn’t go away or give up. Instead, they turned out to vote.

A couple of examples:

Dickenson County in the western part of the state. Left is 2017, right is 2021. pic.twitter.com/gsn0cEXKat

One more. Prince Edward County. Home to beautiful and bucolic Farmville. Went for Northam 51-48 in 2017.

Tonight Youngkin won it 54.5-45, with increased turnout too. pic.twitter.com/cHZac3Y6o3

To be fair, this wasn’t a phenomenon confined to rural areas. The Virginia Public Access Project has a good visualization of how the entire electorate shifted to the right this year. 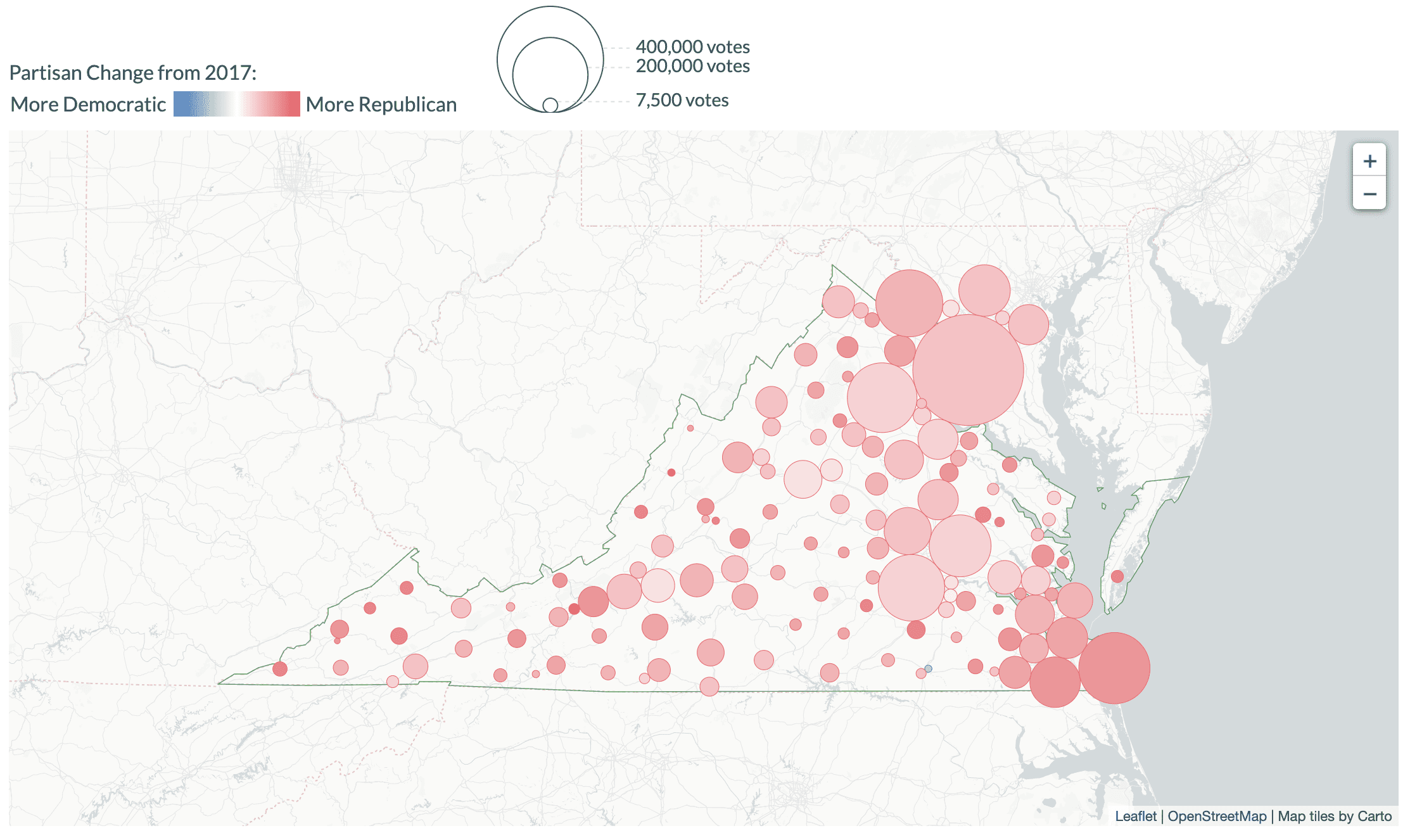 Democrats lost ground from Lee to Loudon counties and everywhere in between, but they were still able to bank a ton of votes in northern Virginia. In order to overcome that structural advantage for Democrats, the GOP needed record turnout in the Virginia Beach area in the southeast part of the state as well as in rural central and western Virginia. Again, data from VPAP shows just how successful Republicans were in bringing out those voters. 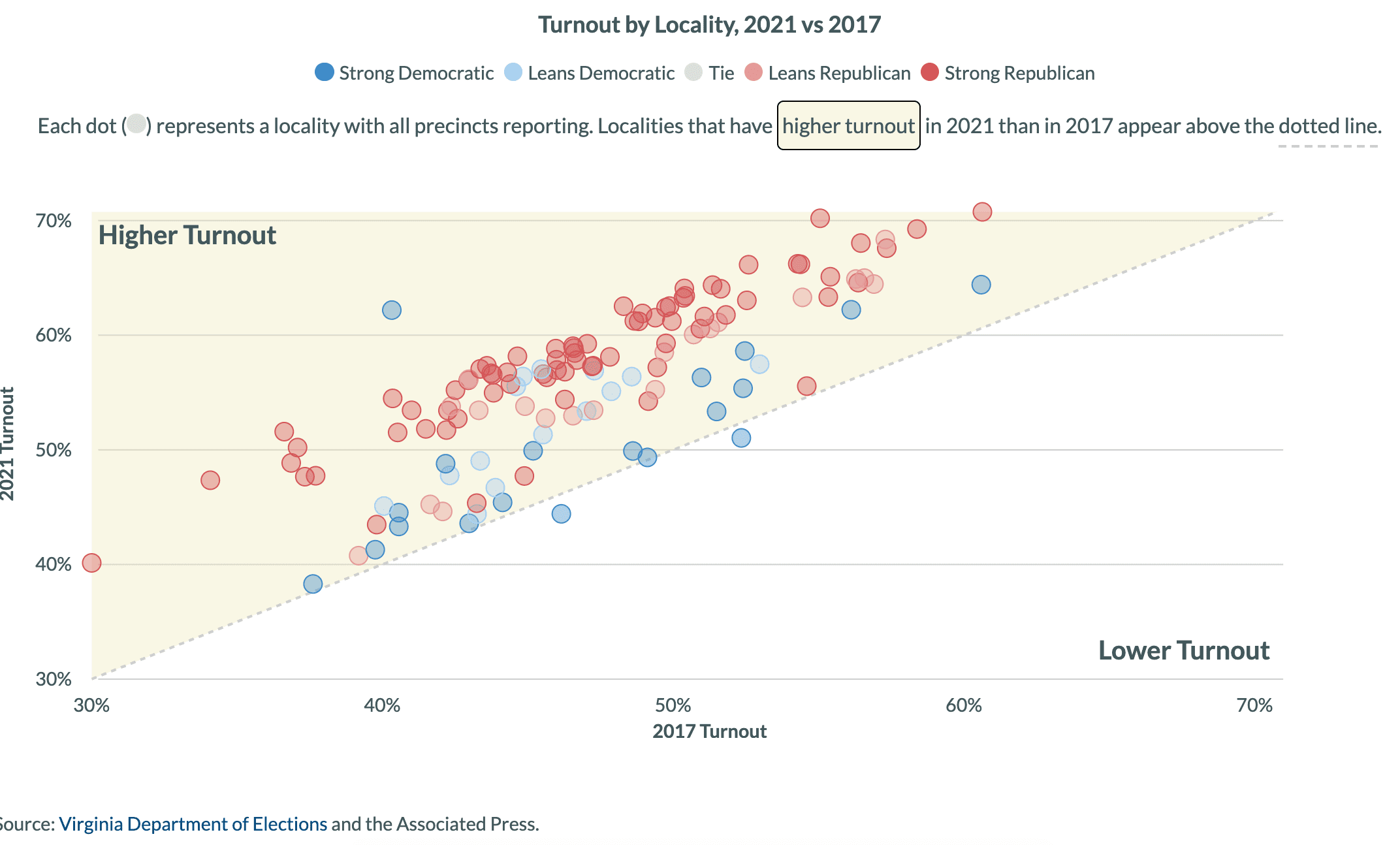 With the exception of the cities of Charlottesville and Portsmouth, Democrats were able to increase their turnout compared to 2017, but not by nearly as much as Republicans. Here a few examples:

As a result of those gains across the state, Republicans were able to not only elect every Republican running in statewide elections, but they were able to flip six seats in the House of Delegates, which will give the GOP a 51-49 majority in the House starting in January.

For gun owners, that means that the threat of a Terry McAuliffe gun and magazine ban are over for at least four years. The Democrats’ desire to target open carry is done for. And for the first time in more than a decade the state will have an Attorney General who’ll stand up for the Second Amendment instead of using his office to attack the right to keep and bear arms.

With Democrats still in control of the state Senate for at least the next two years, the chances of repealing some of the gun control laws put in place since 2019 are pretty slim, but there’s always the possibility that a couple of rural Democrat state senators might be persuaded to see the error of their ways after watching the wave of pro-Second Amendment votes wash across their own districts.

Over at The Bulwark, where the self-proclaimed “true conservatives” are bemoaning McAuliffe’s loss, Tim Miller says that Democrats gave up on rural voters, which I don’t necessarily believe to be the case. Miller thinks the Dems should have engaged in more dirty tricks and negative campaigning, and I know that wouldn’t have helped. In Miller’s assessment of what Democrats did wrong, he never once mentions guns, gun control, or the Second Amendment sanctuary movement, all of which were instrumental in driving up turnout in rural red counties.

The Second Amendment Sanctuary movement and the 2A supporters who were behind it played a key role for Republicans in Virginia on Election Day, even if neither McAuliffe nor Youngkin made gun control or defense of the Second Amendment a big part of their campaigns. In fact, after running on gun control in 2019, most Democrats chose to run away from the issue this year, at least in terms of making new restrictions a big part of their campaign theme. It didn’t work, and gun owners were not lulled into a false sense of complacency. Instead, they remained energized and eager to show their support for the right to keep and bear arms at the ballot box, and they demonstrated that gun owners are still a potent force in what is very much still a battleground state.