Next week, students and staff at Greenwich (Connecticut) High School will be taking part in something called “Say Something Week”, and according to an email allegedly sent by an assistant dean at the school, one of the “activities” will give kids an opportunity to get a free piece of candy, as long as they sign their name on a petition advocating for more gun control.

Below is a portion of an email sent to me by a Greenwich resident who received it, which describes the petition in the pretty vague terms. 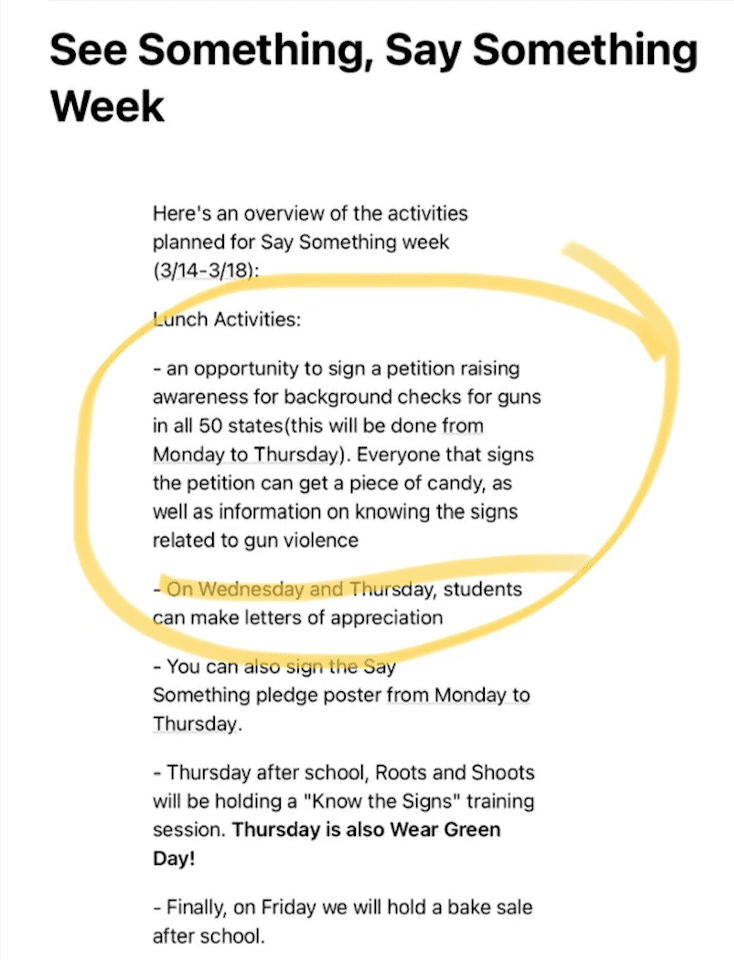 I reached out to the Greenwich schools to get more information about this petition, who approved it, where those signatures will go once they’ve been gathered, and whether or not a politically-motivated petition like this violates any district policies, and Friday afternoon I spoke with a staffer in the school district’s communications department, and I’ve been able to learn a few more details.

“Say Something Week” is the brainchild of Sandy Hook Promise, a gun control group founded by several of the parents whose children were murdered in the attack on Sandy Hook Elementary in Newtown, Connecticut in December of 2012. This isn’t the first year that the event has taken place in Greenwich, although it’s unclear whether students were incentivized in any way to support gun control during previous “Say Something” events.

According to Johnathan Supranowitz, the district communications director, the petition is a student-led initiative that was brought forward by the school’s Roots and Shoots club, not something that the school’s faculty is foisting on students. It’s still unclear to me, however if the petition idea came from Sandy Hook Promise and it’s “Say Something Week” materials, or if it was organically thought up by students themselves. And while the email notes that the Roots and Shoots club is hosting a training session, it doesn’t say who’s behind the petition drive, which does give the appearance (in my opinion, anyway) that this is coming from the school itself.

If Greenwich High School were simply trying to educate kids about the importance of speaking up if they learn of any plans to harm students or staff, there would be no issue at all. In fact, I encourage every school district around the country to do exactly that, because we know that more than 90% of the individuals who plan and/or engage in a targeted attack on a school say something about their plans beforehand. Speaking up and saying something really can save lives, and students need to be aware of that fact.

Offering kids candy in exchange for signing a gun control petition, on the other hand, is ridiculously inappropriate and has absolutely nothing to do with the idea of “if you see something, say something.” Universal background check laws are a main priority of the gun control lobby, which includes Sandy Hook Promise itself. Would the district allow another student group to offer candy to students who’d sign a petition in support of Constitutional Carry? Would they cheerfully promote it in an email to the school community? Mr. Supranowitz didn’t have an immediate answer to those questions, but I hope to learn the answers when I follow up on Monday.

I’m also hoping to see what the petition itself says, because my guess is it’s going to be awfully short on facts. Will it inform students that background checks are already required on retail sales under federal law, or will it focus solely on imposing background checks on the private, person-to-person sales of firearms? That’s already what the law requires in Connecticut, by the way, though it should be noted that it hasn’t prevented homicides from reaching the highest levels in decades in cities like Hartford and New Haven.

I’m guessing the petition also will not inform students about the trouble with enforcing universal background check laws. In the first year that New Mexico’s law was in place, for instance, not a single person was arrested or prosecuted for violating the law. In Colorado, prosecutions have been few and far between, even though violent crime has dramatically increased since the law took effect in 2013.

Requiring background checks on all private sales of firearms is kind of like requiring you to show ID before your friend can offer you a drink. You can make it a law, but unless you assign a police officer to tail every private citizen, there’s no way to proactively enforce it. Criminals are still going to obtain their guns through illicit means regardless of a universal background check law.

That’s important information about universal background checks, but Greenwich High School students aren’t going to learn any of that, unless they happen to be Bearing Arms readers (hey kids!). If gun control advocacy is going to be a part of the Say Something Week activities (and it shouldn’t be), then students deserve the opportunity to get more than just one side of the story. But unless something changes between now and Monday, Greenwich students won’t be getting an education on the efficacy (or lack thereof) of gun control laws like universal background checks during “Say Something Week”.

Again, I would be fine with that, as long as Say Something Week activities weren’t instead incentivizing students to blindly lend their name to gun control efforts. Greenwich High School needs to take the politics out of “Say Something Week” and scrap this gun control effort. Inserting a call to action to criminalize the private transfer of firearms without a background check (and incentivizing it with candy, for crying out loud) is just anti-gun indoctrination, and our kids need and deserve a well-rounded education on this issue.

Well, that didn’t take long. Just a few minutes after this story was first published, I received another email from my source in Greenwich; this one a forward from the same assistant dean who sent out the original email. Instead of promoting the gun control petition, however, this time around the dean replied that she believes the “concerns have been addressed and the petition is no longer part of the events planned.”

That’s great news if true. As I said, I’ll follow up with the school district on Monday morning, and hopefully we’ll be able to get that information confirmed.