The surge in gun purchases that began in March of 2020 has definitely subsided, but the “new normal” for gun sales appears to be higher than what it was before the COVID pandemic, riots and unrest, and a rise in violent crime caused millions of Americans to embrace their right to keep and bear arms for the first time in their lives.

According to the National Shooting Sports Foundation, the adjusted NICS numbers for April 2022 are the third highest ever recorded in April. There were 1,359,908 background checks performed on firearms transfers last month; a decline of 19.7% compared to April of 2021, but still far higher than the number of NICS checks on gun transfers pre-2020. 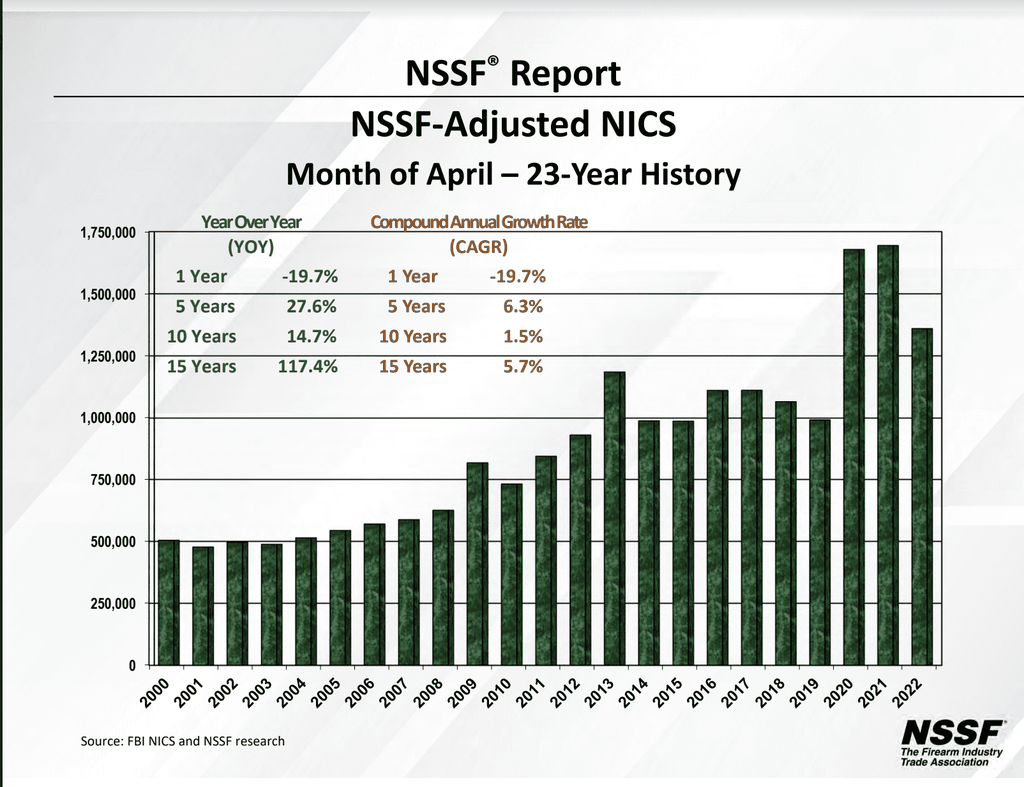 The factors that led to the surge in gun sales starting two years ago have largely subsided, at least with the exception of the rising violent crime rates in many parts of the country, but firearm sales are still strong. Mark Oliva, managing director of public affairs for the National Shootings Sports Foundation, says “it’s clear that those looking for the ‘new normal’ of firearm sales following the two outsized years of 2020 and 2021 can find all the evidence needed to know that law-abiding citizens are turning out by the millions each month to exercise their Second Amendment rights.”

That sounds right to me, though I’d love to know more about who is buying firearms these days. Over the past couple of years we’ve seen gun ownership rates soar among black, Hispanic, and Asian Americans; a trend that started in 2020 and continued last year.

According to retailer surveys conducted by the National Sports Shooting Foundation, there was a 58% increase in gun sales to black buyers from 2019 to 2020. There was a 49% increase in Hispanic buyers and a 43% increase in Asian buyers. Among 60% of retailers, those rates of increase remained the same from 2020 to 2021 as well. Amid the surge in crime, including anti-Asian hate crimes, and uncertainty about safety thanks to the movement to defund police, all three racial groups have seen an increase in people looking to protect themselves.

One side effect of this is the ongoing decay of the gun control movement. Last year, support for gun control fell to a seven-year low, thanks in part to the surge in crime. But it’s the long-term effect of the country gaining more than 7.5 million gun owners that stands out.

If violent crime continues to have an impact on gun sales, which seems likely given that the number one reason people give for purchasing a firearm is “self-defense,” then it would make sense that the rise in gun sales to often underrepresented demographics has also remained in place. That’s great news for all of us who support the right of the people to keep and bear arms, and another discouraging sign for anti-gun activists hoping to turn that right into a wrong in the minds of Americans.

As more of us decide to exercise our right to armed self-defense, gun control activists are going to face stiffer resistance from voters, and not just in ruby-red parts of the country. We’ve already seen public defenders in Democrat-dominated cities like New York, Chicago, and Detroit take public stands in support of the Second Amendment, and if the Supreme Court’s pending decision in NYSPRA v. Bruen opens the door to “shall-issue” concealed carry licenses in places like New York, New Jersey, California, and Maryland I expect the demand for the right to carry to be overwhelming. Whatever the NICS statistics show from month-to-month, I’d say the “new normal” is an expanded appreciation and support for our right to keep and bear arms, and that’s a very good thing to see.

NJ carry crackdown could be law by Christmas
Dec 06, 2022