This morning I wrote that the opening day crowds for the NRA’s Annual Meeting were a lot smaller than I’ve ever seen in 18 years of covering the organization’s convention, but I will say that those smaller crowds still dwarf the number of protesters outside of the convention on Friday afternoon. I’m horrible at estimating crowd sizes, but Forbes’ estimate of about one thousand seems about right to me.

At street level, the protests looked and sounded pretty large, thanks to the use of megaphones, loudspeakers, drumming, and chanting. Several hundred of the protesters positioned themselves directly across the street from the George R. Brown Convention Center, with metal barricades and Houston police (joined by Texas DPS) standing between the anti-gun advocates and several hundred NRA members who wandered outside of the meeting to watch the protests underneath the hot late-May Texas sun. Throughout the afternoon dozens in crowd shouted “shame on you” and jeered NRA members trying to navigate their way to a parking garage located underneath the park where the protests were taking place, but from what I was able to witness firsthand the protests remained peaceful.

A bird’s eye view of the protests, however, shows that the crowd was confined to a very small area of what isn’t all that big a park. 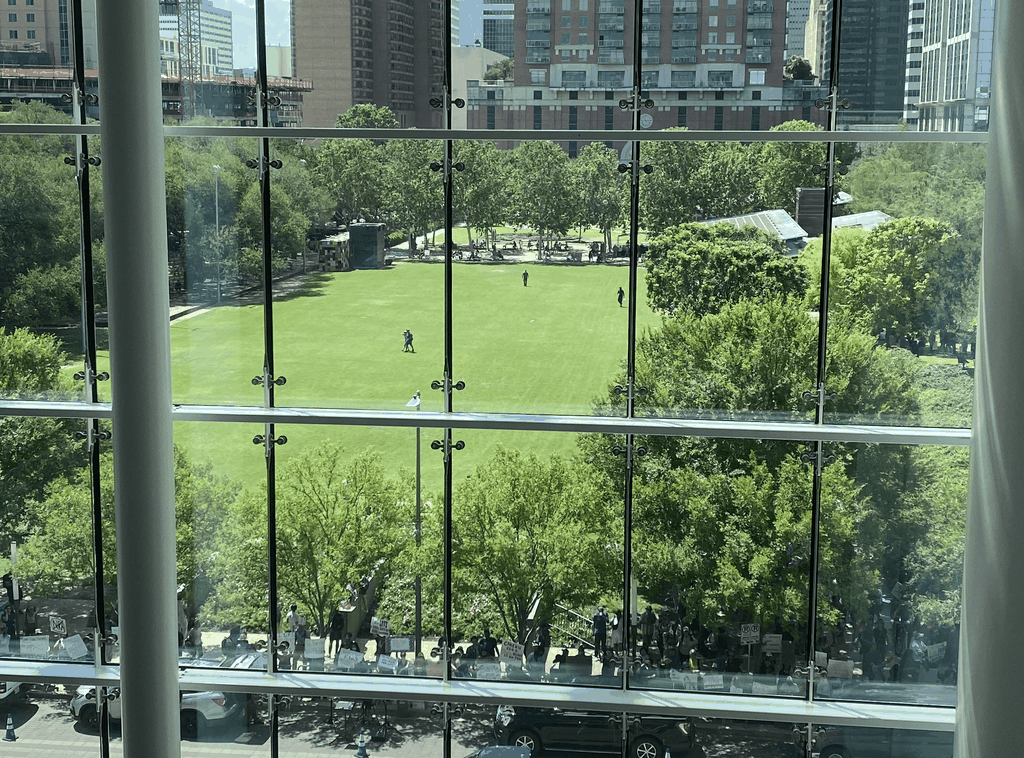 You can see the thin line of protesters at the bottom of the picture. On the upper right is the area of the park where anti-gun activists and politicians like David Hogg and Robert Francis “Beto” O’Rourke blamed the NRA, Republicans, legal gun owners, and pretty much anyone and everyone who doesn’t buy into the idea that a universal background check law would have stopped an atrocity that was committed by someone who passed a background check. That big open green space in the middle could have held thousands of more protesters, but they never materialized.

Of course the protesters who were on hand weren’t just calling for criminalizing private sales of firearms. They were demanding a ban on so-called assault weapons, “red flag” laws, shutting down the NRA, voting Greg Abbott out of office, and NRA members going and ****ing themselves (among other things). Many in the crowd of protesters held signs accusing gun owners of caring more about their firearms than children, ignoring the many families in attendance at the NRA’s convention, some of whom were taking in the protests and getting a lesson on the First Amendment as well as the Second. 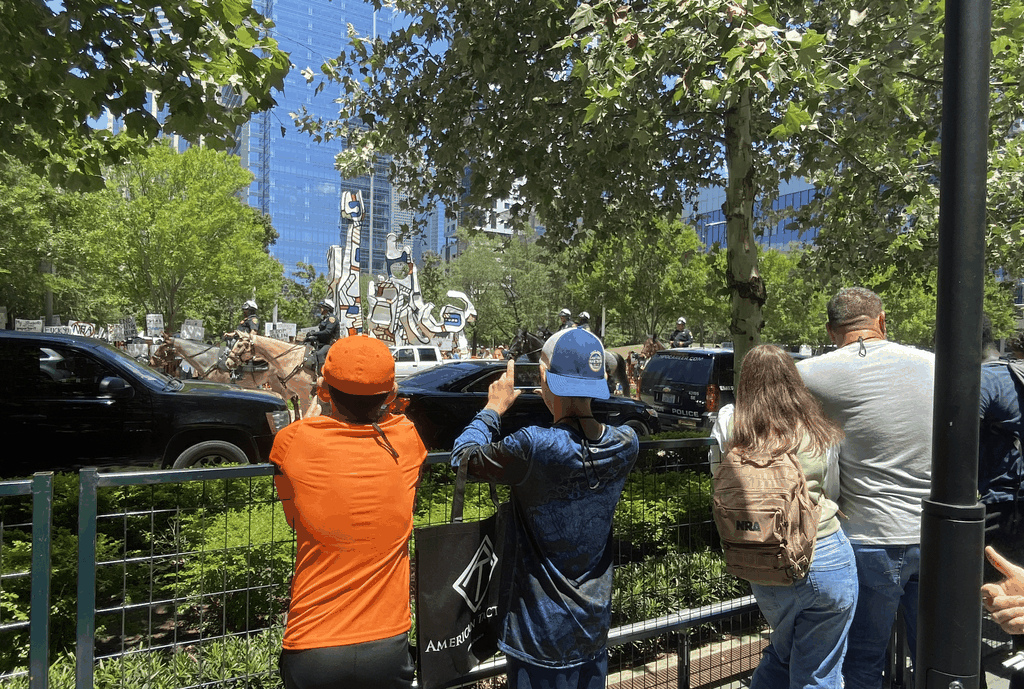 While I heard some grumbles from gun owners about the protests (including one man who wished aloud that the police would shut down the protests because of the noise), the vast majority of the NRA members I spoke to said they believe in the right to protest, as long as it’s peacefully. Nathanial and Pedro, two friends in their early 20s who hail from Houston, told me that they had no problem whatsoever with the protesters, though they made it clear that they don’t believe that gun control would be any impediment to violent criminals and deranged murderers.

When I asked the pair what they thought could be effective at reducing the kind of atrocity that occurred in Uvalde this week, without hesitation both men said “mental health,” though Pedro also quickly brought up the delays on the part of law enforcement in engaging the attacker after he barricaded himself inside a classroom at Robb Elementary School in Uvalde.

Oddly, this was one of the few protests from the Left that I’ve seen since 2020 where the police weren’t really a part of the ire of the crowd, even though there are now plenty of law enforcement officials who are now expressing their own outrage about the lengthy delays by officers on the ground.

The decision by the on-site commander to delay breaching the classroom of a Texas elementary school during the mass shooting this week was the “wrong decision,” authorities said Friday. Nearly 20 officers stood in a hallway outside of the classrooms during the attack on Robb Elementary School for more than 45 minutes before agents used a master key to open a door and confront the gunman, Texas Department of Public Safety Director Steven McCraw said at a news conference.

The on-site commander — identified by the Associated Press as the school district’s police chief — believed 18-year-old Salvador Ramos was barricaded in a classroom in Uvalde during Tuesday’s attack and that the children were not at risk, McCraw said.

“He was convinced at the time that there was no more threat to the children and that the subject was barricaded and that they had time to organize” to get into the classroom, McCraw said.

“Of course it was not the right decision. It was the wrong decision,” he said.

The more we learn about the attack and how it unfolded, the more outrageous those delays become, but for the protesters outside of the NRA meeting, the real outrage is that there are millions of Americans (including tens of thousands on hand in Houston) who don’t buy in to their belief that if we only give up our right to self-defense, cold-blooded killers will lay down their guns, knives, and gas cans.

This CBS Tweet About Sam Smith's GRAMMYs Performance Is Raising a Lot of Eyebrows
Townhall
HUME-ILIATED: Brit Hume points out ABSURDITY of climate change crisis in 7 words, deadpan snark
Twitchy
Joe Biden Shows Off His Notes for the State of the Union and Perhaps He Shouldn't Have
Redstate
MIDDLE EAST EARTHQUAKE: 'An Emergency Within an Emergency'
PJ Media