Joe Biden continues to enlist the help of Hollywood in his push to put new gun control laws on the books. Following actor and Uvalde, Texas native Matthew McConaughey’s speech at the White House press room, Biden himself joined late night host Jimmy Kimmel in Los Angeles on Wednesday evening, and the topic of gun control was front and center.

The Associated Press ridiculously claims that Biden faced tough questions from the comedian, but offer up only puffballs as their examples of the supposedly harsh grilling that Kimmel delivered.

Kimmel began his interview by asking about gun control, referencing a string of recent mass shootings.

“I guess, I mean, just to get into it, why haven’t we done anything about this?” Kimmel asked.

Biden responded that “this is not your father’s Republican Party,” and he blamed his political opposition for being too afraid to do anything about guns because they fear primary election challenges.

Kimmel pressed Biden on whether he could use executive orders to increase gun control, noting that former President Donald Trump “passed them out like Halloween candy.”

Although Biden has taken some unilateral steps on firearms, the president said he wasn’t interested in stepping beyond the limits of his authority.

“I don’t want to emulate Trump’s abuse of the Constitution and constitutional authority,” he said.

“Well, guess what,” he said. “If we do the same thing they do, our democracy will literally be in jeopardy. Not a joke.”

Those questions are as soft as a freshly made Krispy Kreme donut, as Fox News contributor and media columnist Joe Concha noted Thursday morning.

It wasn’t even a softball interview for President Biden, it was tee ball. My kindergartner plays tee ball. It’s a lot easier to hit. The ball doesn’t move. It stays on a stick. You get the point. … And don’t give me the whole, ‘Well, Kimmel’s a comedian. He’s not a journalist.’ He sure tries to act like one every night on his show when he’s really nothing more than a political activist. … Jimmy Kimmel, he didn’t talk really much about inflation or at least he brushed it off. And Jimmy Kimmel did that because he’s in the top 1% of the richest 1%. He doesn’t feel it the way so many low-income and middle-class Americans do. … The American people are fed up on several fronts, and this is the last thing they want to see.

Even on gun control Kimmel didn’t deliver any hard questions, choosing instead to tee up the president’s talking points blaming Republicans for the actions of violent criminals. Heck, Kimmel could have followed up his question about executive actions by asking Biden if Trump’s executive order banning bump stocks was an example of constitutional abuse if he wanted to, but that would have put Biden in an awkward spot, which Kimmel most certainly wasn’t aiming to do.

Or, if Kimmel really wanted to press Biden on executive orders, he could have pointed out that plenty of gun control activists and groups believe he can do more via executive action and asked the president what has been proposed that he believes would abuse his constitutional authority. That would have been an honestly interesting question, though I doubt he would have received anything other than Biden’s typical word salad as a response.

Earlier this week I asked if Matthew McConaughey’s White House appearance moved the needle on gun control, but there’s no need for a similar query here. Few Americans watch Kimmel in the first place, and there was nothing in the president’s rambling remarks last night that would inspire any Republican senator to lend their support to the gun control negotiations currently underway in the Senate. Quite the opposite, in fact.

Biden continues to insist that the only reason Republicans are rejecting new gun control laws is because they’re afraid of the gun lobby or primary challenges, which not only glosses over the fact that his argument explicitly means that there are large numbers of voters who don’t like Biden’s gun ban plans, but paints the Republican lawmakers he should be trying to engage with as the mustache-twirling Snidely Whiplash villains in his quest to enact “reasonable” and “commonsense” measures.

I get the sense that Biden would rather blame Republicans for inaction than see any sort of bipartisan agreement get to his desk between now and November, and his late night softball session with Jimmy Kimmel gave me no reason to change my mind. Joe Biden is desperately searching for a political solution to his very real political problems in the upcoming midterms, and a Democratic base angry at congressional inaction on gun control is theoretically going to be more fired up than one that’s celebrating the passage of “modest” measures like giving grants to states that impose “red flag” laws or even raising the age to purchase a modern sporting rifle to 21.

With Biden’s approval rating reaching new lows, I’d say that’s wishful thinking on his part, but desperate times call for desperate measures and by all accounts Biden is desperate to do “something” to turn these numbers around before Americans head to the polls in November. I’m sure that Biden will sign anything that gets to his desk, but I still have a sneaking suspicion that he’d be happier if the talks underway don’t result in a deal that can pass the Senate… which, ironically, is probably one of the few areas of agreement between Biden and Second Amendment activists. 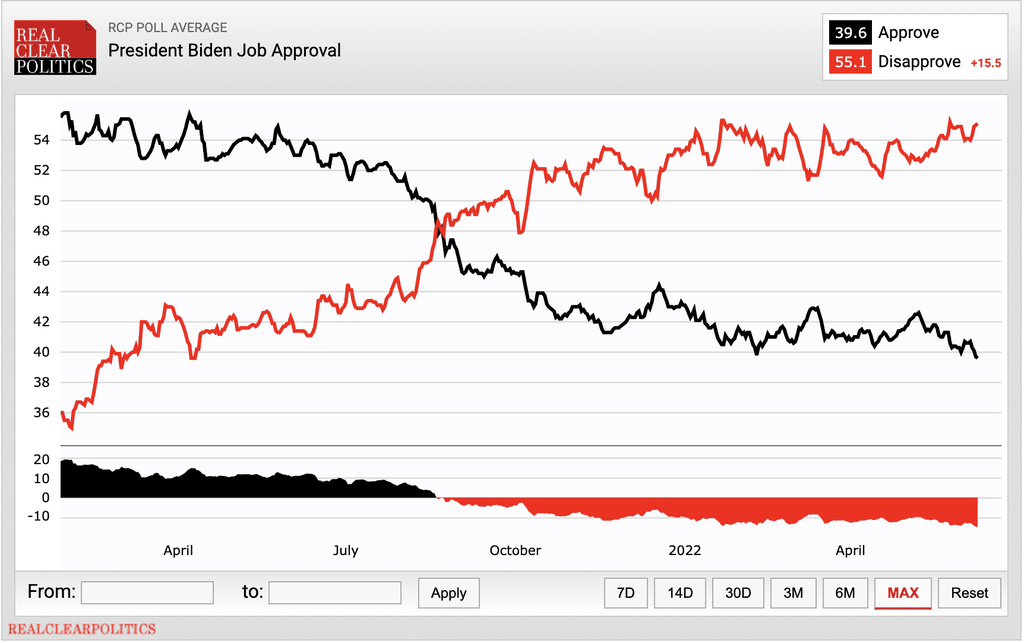 If You Really Wanted to Destroy the U.S., Then...
Townhall
Place your bets! People are speculating why Klaus Schwab is in Washington, DC
Twitchy
Did an ‘LGBT-Caucus’ California State Senator Just Pull a 'Jussie Smollett?'
Redstate
Police Release Confusing Information About University of Idaho Murders
PJ Media