Gun sales top 1-million for 38th straight month. Here's why that matters for the midterms

Americans might not be buying guns at the dizzying pace we saw throughout much of 2020 and 2021, but for the 38th straight month gun sales topped 1-million, according to the latest figures from the National Shooting Sports Foundation.

The NSSF estimates based on numbers from the National Instant Check System that 1,265,311 firearms were sold at retail last month. That’s a decline of 11.3% compared to October 2021, but it’s also the third highest number ever reported for October sales, trailing only 2020 and last year. A closer look at the data going back to the year 2000 shows that while sales are off of their two-year highs they’re still far above the levels we saw between 2000 and 2012. 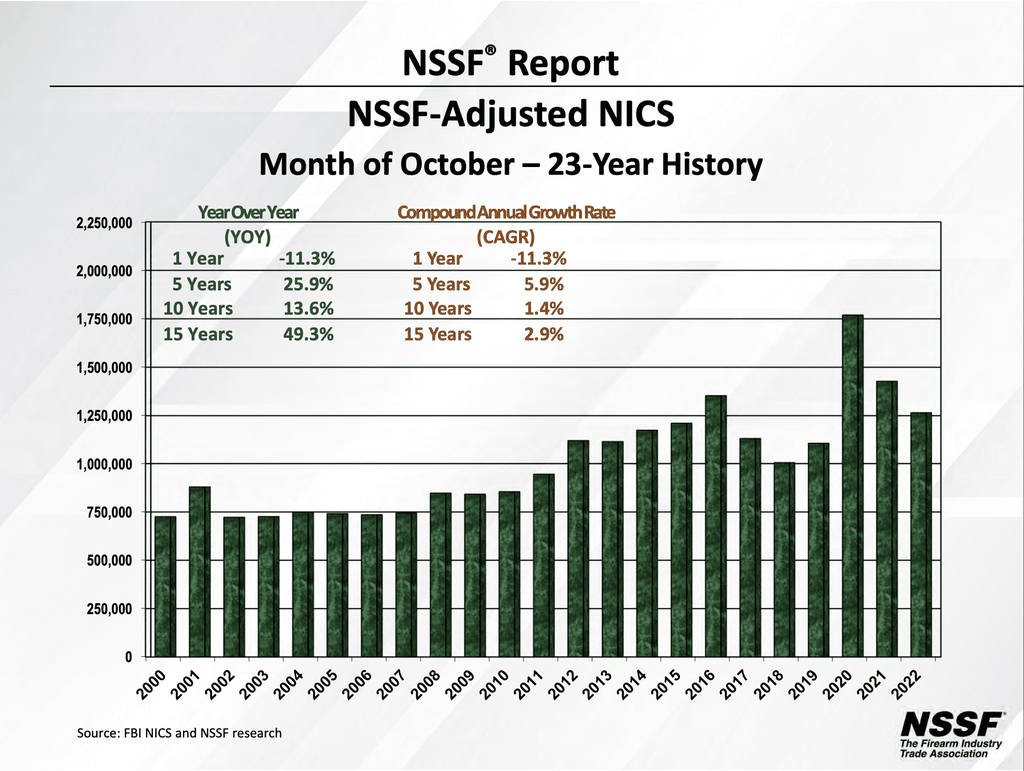 NSSF director of public affairs Mark Oliva says the NICS figures “continue to reflect a steady interest by law-abiding Americans to exercise their God-given Second Amendment rights,” adding that “despite the claims of some elected officials that crime is not a national concern, these figures reflect the true sentiment of America. These gun owners are choosing to protect themselves.”

Despite the best efforts of anti-gun activists, I might add. On Tuesday, voters in Oregon will have the chance to weigh in on a ballot measure that would create a “permit-to-purchase” system for all handguns; one that would allow law enforcement to deny someone the ability to buy or possess a pistol even if they’re able to pass a federal background check. San Jose, California’s city council wants all gun owners to pay a fee to own a gun as well as shell out the money for an insurance policy before they can legally possess a gun inside the city limits. And in towns across the country anti-gun activists are trying to block gun stores from opening, explicitly trying to interfere with an individual’s ability to exercise a fundamental constitutional right.

Those are just a few examples of a much broader attempt to curtail our Second Amendment rights through legislation, regulation, and even cultural indoctrination, and yet month after month we’re seeing hundreds of thousands of Americans embrace those rights; many for the first time in their lives. Michelle McGhee is one of those folks. The Arkansas teacher bought her first gun two years ago, and recently spoke to NPR’s Scott Simon about her decision.

MCGHEE: I originally bought a gun – I was recently divorced and a single mom to a 17-year-old. And I wanted it for peace of mind and protection for my family. And also, I live in the rural area of Arkansas, and I travel quite a bit where there is not always phone service or cell towers. That was the main reason why I purchased my first one.

SIMON: Michelle McGhee, would you rely on the police if something – God forbid, some kind of terrible shooting broke out into your school?

MCGHEE: I think I would want to be proactive. I would also support doing anything that we needed to do to keep our kids safe and our colleagues and our faculty safe until police can arrive. If there is a – you know, a well-trained staff member who volunteers and would want to carry and our board supported that, then I would be I would be for that.

SIMON: Do you – and if you don’t want to answer, I am prepared. Do you bring your gun to school?

MCGHEE: I actually do not. I live in town. I’m about four minutes from my house to the school building. So it’s a straight shot. So I do not carry mine. But if the board approved and I decided that that’s a responsibility that I wanted to take on and if I went through proper training, I don’t think I would hesitate.

Personally, I’m glad that someone like McGhee is a gun owner, but I know that gun control activists don’t feel the same way. According to them we have too many guns and too many gun owners, and the only way to protect the public from violent criminals is to prevent people like Michelle from being able to protect herself.

Americans have been voting with their wallets, and on Tuesday I have a feeling we’re going to see that same energy directed at the ballot box. Gun control activists are already trying to provide a pre-election spin on what could be a disastrous evening for their movement, proclaiming that it’s now “safe” for Democrats to tout their support for gun control because public polling shows Americans want more gun laws. That argument flies in the face of the latest poll out of Oregon, however, which shows majority opposition to the magazine ban and permit-to-purchase system that’s on the ballot. As it turns out, the more voters get to know the devil in the gun control details, the less likely they are to back supposedly innocuous “gun safety” proposals. And of course, the more gun owners there are, the more likely they are to care about these issues. A million guns sold every month doesn’t translate into a million new Second Amendment advocates every four weeks, of course, but there’s a sizable number of voters who’ve become personally invested in protecting the right to keep and bear arms and I think their presence will be felt in the midterms.

Measure 114 and the placebo effect

Polis considering next step on gun control after it failed
Dec 01, 2022

With the 2022 Midterms Over, These Old Stories About Biden Are Resurfacing
Townhall
Apple's CEO was eager to answer reporter's questions about China & protests (JUST KIDDING!)
Twitchy
Martha MacCallum Leaves John Kirby Stuttering Over Differing Treatment of Twitter and Apple
Redstate
Tara Reade Is Ready to Testify Before Congress Against Joe Biden
PJ Media