At SHOT Show University, the FBI provided an update on the Nation Instant Criminal Background Check System (NICS). What they shared was staggering and sure to make the anti-gunners throw up their hands in frustration.

For those unfamiliar with NICS, it is a system used by the Federal Bureau of Investigation (FBI) to conduct background checks on individuals who want to purchase firearms from a licensed firearms dealer in the United States.

The NICS system was created in response to the Brady Handgun Violence Prevention Act of 1993, which required background checks for all firearms sales made through licensed dealers. The NICS check is done by a firearms dealer when a customer wants to purchase a firearm. The dealer will contact the FBI or a state point of contact through a toll-free telephone number or an online system and provide the customer’s information. The FBI or the state point of contact will then check the provided information against records in the NICS database and inform the dealer whether the sale can proceed or not. If the check is delayed for more than three business days, the dealer can proceed with the sale but is required to keep records of the transaction.

While many of these numbers were released previously, it’s helpful to look at the growth in background checks and firearms purchases over the past 20 years. For example, in 2020 and 2021, the FBI conducted almost 39 million NICS background checks each year. The most checks were conducted in 2020, with over 39.7 million, a record high, which the FBI attributed to pandemic buying, but we all remember the social unrest during the Summer of Love – a more likely explanation for the record number of firearms purchases.

As you can see from the chart shared by the FBI, the number of checks has been increasing since the implementation of the background check system in 1998 (chart shows 2003-2022) and has seen a marked increase in recent years. Although 2022 numbers are down from 2020 and 2021, it’s following the trend line and is up from 2019. 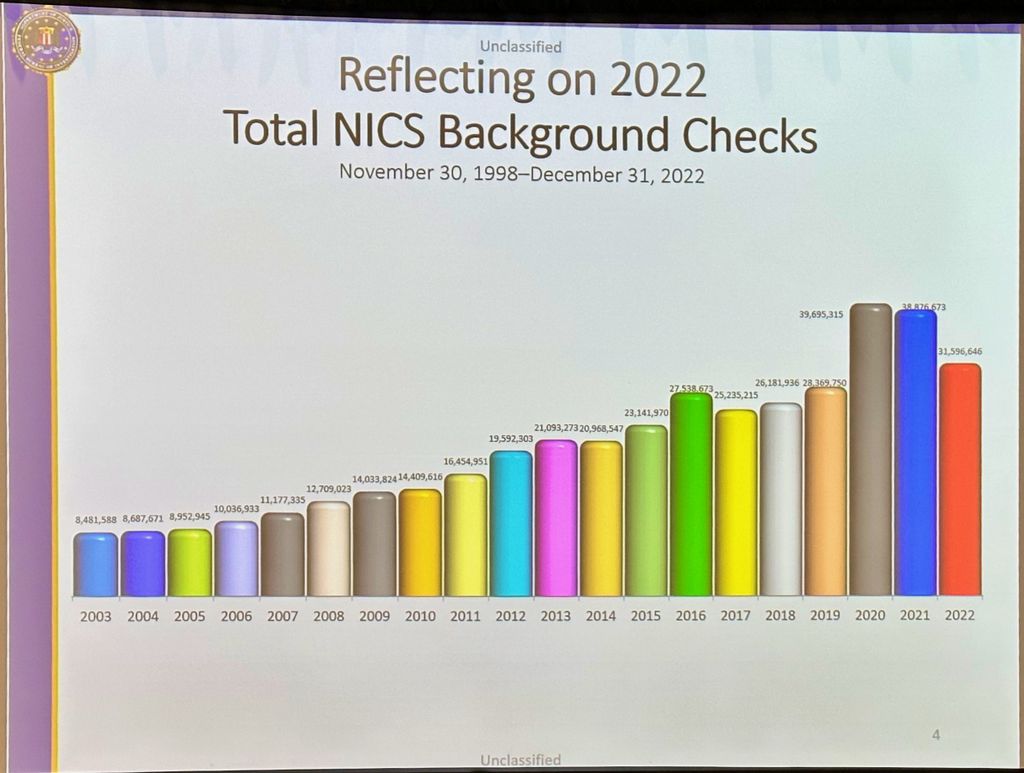 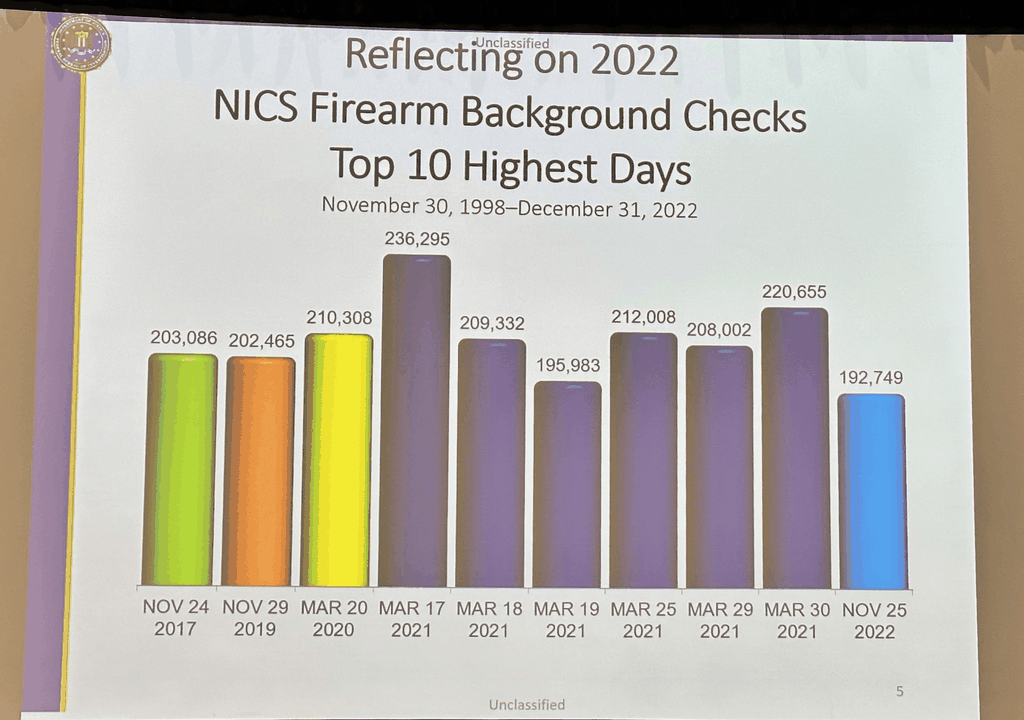 Overall, the NICS system has processed over 443 million (443,172,700) requests since its inception. Almost 74 million of those NICS checks were done via the NICS E-Check system. And that number will only grow as the online system is much faster than making a call to the NICS contact center. 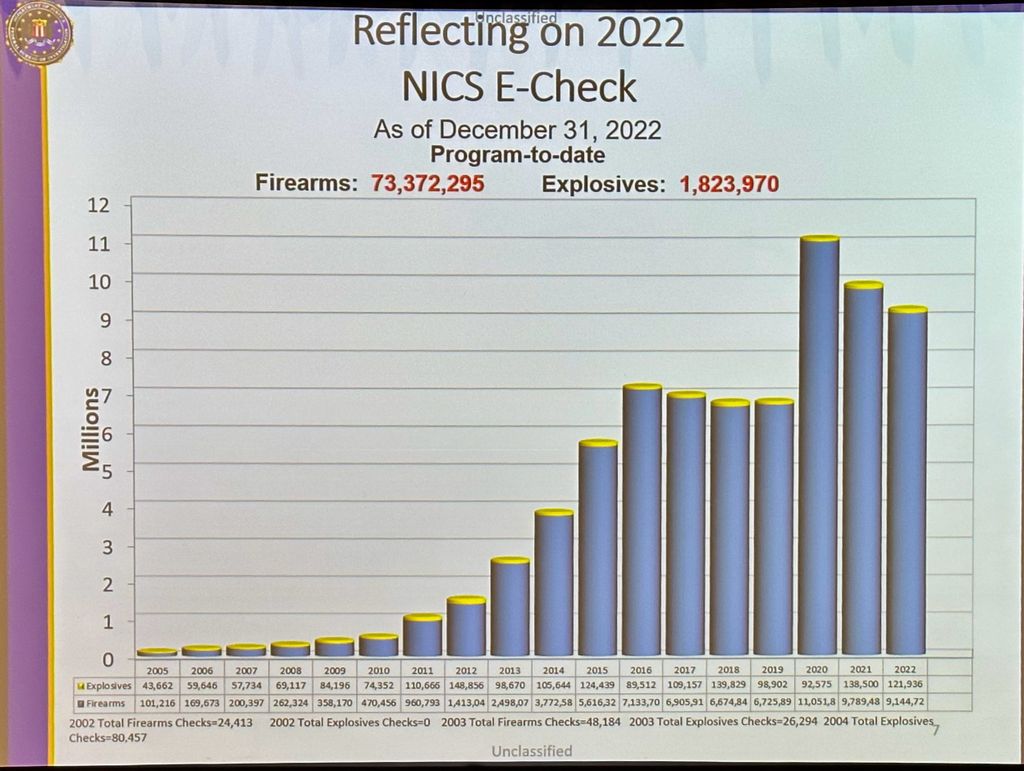 Not every state participates in the FBI NICS system. A Point of Contact (POC) state is a state that has agreed to conduct background checks for firearms purchases on behalf of the FBI through the National Instant Criminal Background Check System (NICS). POC states can access the NICS database and have additional state-specific information available to them, allowing them to conduct more comprehensive background checks. In a POC state, when a firearms dealer initiates a NICS check, the dealer contacts the state point of contact (POC) instead of the FBI. The POC conducts the check using the NICS database as well as any additional state-specific databases and records that the state has access to and informs the dealer whether the sale can proceed or not.

Some states, like California, Colorado, and Oregon, are designated as POC states and are responsible for conducting background checks for firearms purchases within their state. They use the NICS system to perform the check but also have additional state-specific laws, regulations and databases that they check against before allowing a sale to proceed.

It’s worth noting that all states participate in the NICS, but not all states are POC states. Some states have chosen to use the FBI to conduct their background checks and not have a state-specific point of contact. In 13 states (in red), state law enforcement is the “point of contact” for background checks. In four states (in blue), FFLs contact the state for handguns and the FBI for long guns. Two states (in yellow), Nebraska and North Carolina, use state-issued permits in lieu of NICS for handguns. 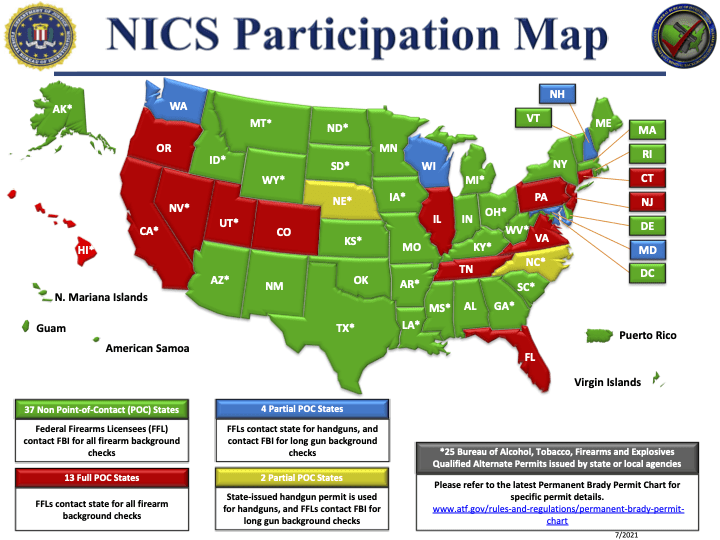 All in all, it was a fascinating look at how the FBI conducts NICS checks and a decent reminder just how many Americans are exercising their Second Amendment rights by purchasing firearms.

China Is Not Happy That We Shot Down Their Spy Balloon
Townhall
SAVAGE thread exposing Rick Wilson for who he REALLY is should wake his 'fans' up (but it won't)
Twitchy
'Dark Brandon' Returns in Desperate Attempt to Gloss Over Joe Biden's Weakness
Redstate
Hot Air: No Global Warming for Eight Years
PJ Media