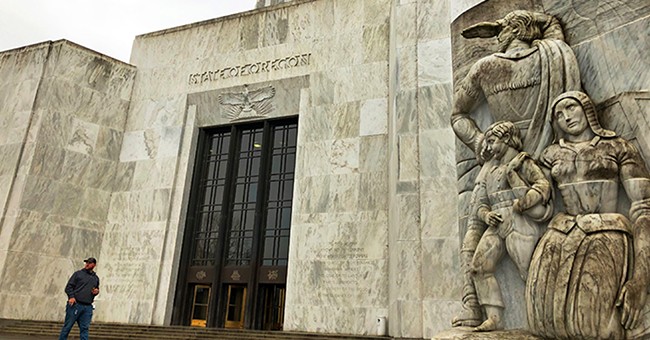 An Oregon bill wanted to impose draconian restrictions on gun owners. For example, it would limit round capacity to just five rounds. That would have made most revolvers illegal.

As progressive as Oregon is, it sounded like something lawmakers would consider. Amazingly, better sense prevailed.

When Portland high schooler Eliana Andrews helped organize the 2018 March For Our Lives in downtown Portland, she said many Oregon legislators approached her and her peers, eager to work with them to create new state gun laws.

That encouragement kick-started efforts that led to the creation of Senate Bill 501, a comprehensive gun control bill authored by Portland area group Students for Change.

But now that a concrete bill is in front of them, Andrews said, Oregon legislators aren’t as interested in passing wide-reaching gun control legislation. In fact, they’re keeping the bill from moving forward.

“Now that we brought something, they won’t support it,” she said, “and they won’t really talk to us about it, which is really disappointing.”

If passed, SB 501 would enact sweeping gun control reform in Oregon. Its stipulations include requiring people to have a permit before purchasing a gun, obliging gun owners to properly lock and store their weapons when not in use, and placing limits on how much ammunition someone can buy in a month, among others. Andrews said that each requirement in the bill was modeled after gun control legislation that passed elsewhere—Colorado was a particular source of inspiration—and designed to prevent mass shootings.

There’s just one problem: SB 501 isn’t going to get a hearing in the senate’s judiciary committee, meaning it likely won’t be voted on this session. That’s disappointing for the Portland area teens who researched and authored the bill with the straightforward goal of reducing gun violence in schools.

Andrews can claim that each requirement is modeled after something passed elsewhere, but she’s not mentioning that she took what passed and turned it up to 11.

For example, we have the aforementioned round capacity. Yes, many states limit round capacity. It’s stupid, but they do. However, none restrict it to such an insane degree that even century-old models of firearms like revolvers couldn’t comply with it.

Yes, other states have started restricting ammunition purchases, but SB 501 would limit people to 20 rounds per month. No one does that anywhere in the country. That’s not even enough to maintain marksmanship skills for many owners, especially those with multiple handguns of different calibers. For example, if you have a .38 and a 9mm, you only get to buy ten rounds for each. Don’t forget self-defense ammo, either. You have to decide what you’re going to buy at any given time.

These teens can lament it all they want, but they just learned a very harsh lesson about the legislative process. They learned they couldn’t take a law from another state, ramp it up a ridiculous degree, and foist it onto a state’s population just because they believe really hard.

Luckily, the people of Oregon are safe from this insanity.

For now, at least.