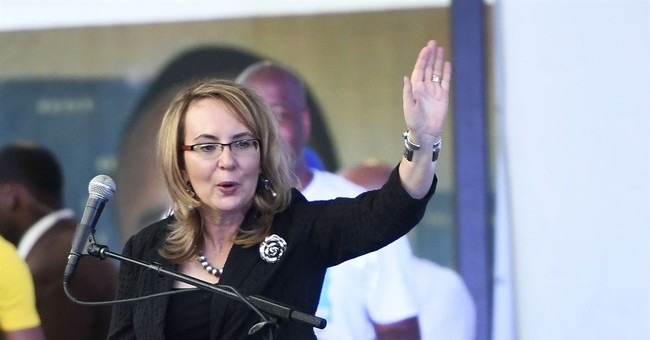 But things have settled down a bit, just like they always do.

That doesn’t stop gun control activists from pretending that they still have all the momentum.

In the wake of the Parkland, Fla., high school shooting in February, gun-control advocates have said there is something different about the debate this year — that the issue is on the minds of suburban moms and younger, traditionally less engaged voters.

The Giffords Law Center to Prevent Gun Violence counts 55 new gun-control laws passing in 26 states in the past five months. That’s unusual in the number of laws, the variety of the laws passed and the bipartisan support a number of them had. Republican governors in 15 states signed bills gun-control advocates supported.

Gun-control advocates are now on the offensive — a shift from 2017, when their focus was largely defensive, trying to stop states from allowing guns on university campuses and in churches.

One of gun-control advocates’ biggest wins of the year came in Vermont, a state with very few gun laws. This spring, Republican Gov. Phil Scott signed a package of gun-control bills into law, including expanding background checks. And he specifically cited recent mass shootings as a reason.

“If we had not even tried to reduce the possibility of a tragedy here in Vermont like Parkland or Virginia Tech … that would be hard to live with,” Scott told a group of gun-rights supporters surrounding him at the State House in April, some shouting he was a traitor.

For the first time in recent history, an entirely Republican-controlled state passed a bill limiting the general population’s access to guns. This was Florida, which approved a number of gun laws in response to the Parkland shooting.

Now, let’s remember that Florida was where Parkland took place. Tensions were really high, and lawmakers caved. Further, they’ve been catching hell for that ever since. Do not be surprised to see significant turnover in the Florida legislature in the coming years because of it, either.

However, almost all of this happened months ago. Since then, very little has taken place that favors gun control. Even Illinois has seen the veto of an attempt to add another licensing requirement to gun dealers.

In other words, the moment is over.

So why tout those past wins? The answer is simple. The hope is that by talking about those wins in the wake of Parkland, they can convince people that they still have the momentum. They want to make people believe they’re winning, all because no one likes to back a loser. If groups like Giffords can’t win, people will stop donating money, and they know it. Half of the reason the NRA is so successful as a fundraising organization is that they’ve won enough fights that we all know our money will help advance the cause.

Giffords and similar organizations don’t have that track record.

What happens to them is that they win a few battles here or there, then long periods of time will come where they can’t seem even to get their shoelaces tied. People get sick of that and decide to either hold onto their money or donate it elsewhere.

Again, no one wants to back a loser.

So, Giffords is trying to go on the offensive to make it look like they’re still winning when, at best for them, it’s a stalemate. But it’s not the first time they’ve misrepresented reality, so we probably shouldn’t act too surprised.