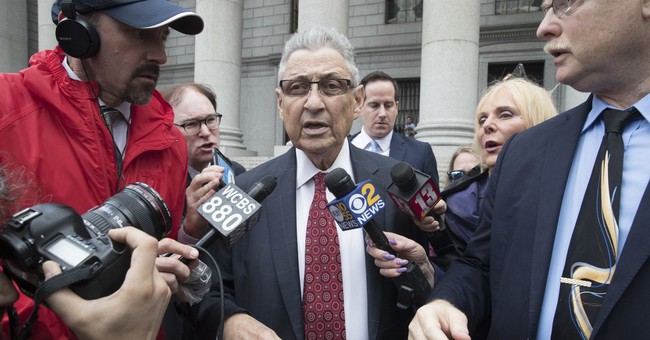 There’s nothing quite like watching an ideological opponent fall because of their own moral failings. This is probably a universal truth that exists regardless of political ideology. What’s great about it is that it helps make the universe feel like a more just place, that moment when someone who did something you consider heinous but others love turns out to be the villainous scumbag you always thought they were.

For the second time since 2015, Silver, a Manhattan Democrat, was unanimously found guilty after a jury trial in May of making millions off private schemes conducted in part through his public office. The ruling came following a retrial after his first conviction was overturned by an appeals court. In all, Silver is believed to have taken $4 million in bribes as well as pocketing another $1 million through money laundering the proceeds.

“When he assumed his powerful position at the top of New York State government, Sheldon Silver took an oath to do the work of the people,” said U.S. Attorney Geoffrey S. Berman in a statement. “Instead, he leveraged his tremendous influence to pad his bank account and line his pockets.”

According to court documents, agents from the FBI discovered Silver collected $700,000 in kickbacks for helping to arrange real estate deals in Manhattan that included using his position to enhance the property’s value. Prosecutors argued he also funneled more than $500,000 in state grants to a physician who in turn referred lucrative asbestos patients to Silver’s law firm. Those referrals generated fees to Silver worth over $3 million. Federal investigators said Silver collected more than $6 million from the firm for which he never actually performed any legal work.

Of course, a case could be made that every single lawmaker who supports gun control is corrupt. After all, they’re supporting undermining the Constitution they all swear to support and defend.

But few are like Silver, though. Well, few that we know about, at least.

Lawmakers like Silver, however, are what many of us think about when we consider the New Yorkers who sneer at the rest of us and our refusal to see their version of “reason” on guns. We see slimy, corrupt, big-city legislators who would sell their own mothers just to make a buck and for some of us such as myself, we recognize that these same lawmakers would walk all over us in even more ways if they got half a chance.

We’re not going to give up our guns because there will always be people like Silver and at some point, they’re not likely to be content to make a few bucks on the side, they’ll want everything.

I, for one, refuse to give them that. Like the man said, “From my cold, dead hands.” Yes, I mean that literally, because if I can’t trust someone like Silver to conduct business honorably, how can I trust him to protect my freedoms? Especially since he’d proven I couldn’t.