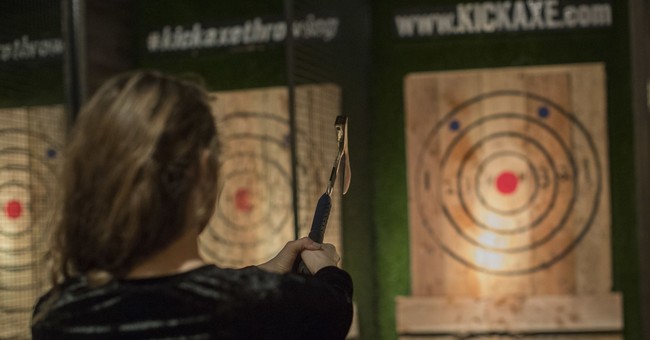 I still remember the first time I was told never to bring a knife to a gunfight. I was pretty young, and couldn’t imagine anyone being so stupid, even if the phrase was metaphorical.

However, I’ve seen plenty of examples of people who literally brought knives to gunfights. Oh, they didn’t think it was a gunfight when they left the house but found out pretty damn quick that trying to rob a man at knifepoint doesn’t work when you’re looking at the business end of a 9mm.

That’s why it’s not surprising to see a hatchet fail to prevail over an armed citizen.

Deputies said a victim was found with a non-life threatening gunshot wound to the arm and was taken to the hospital.

Investigators told ABC 17 News that deputies learned during the investigation the gunshot victim unlawfully entered the home with a hatchet and made threats toward the owner.

The homeowner reportedly got into a fight with the person and shot the intruder once they entered the home.

Investigators have found that the homeowner acted in self-defense and no charges have been filed.

However, that still doesn’t change the fact that someone entered this guy’s home illegally armed with a hatchet and started making threats. I’m sorry, but that’s just asking to be shot, which he was.

It takes a certain amount of evil to want to murder someone with a hatchet. After all, it’s a brutal tool, and while someone might use such a thing in self-defense simply because it’s handy, the kind of person who looks at a hatchet and thinks, “Ah, perfect!” is probably the kind of person who thinks a machete is too passe for murder these days.

The only thing I can think of is that if you wanted to commit suicide by having someone else pull the trigger, taking a hatchet over to someone’s house, break in, then threaten them so they would shoot you might well sound like a winner.

If that was the case, then old boy screwed up because he was shot in the arm and wasn’t facing any life-threatening injuries.

Far more likely, though, is that he was (allegedly) someone who wanted to scare and intimidate the resident, possibly with the will to back up those threats, and didn’t realize he was going to be the one who ended up with extra holes and less blood at the end of the night than he started with.

If the facts as reported are accurate, then my only wish is that Hatchet Man hadn’t been able to be treated for anything in any part of the hospital that doesn’t have “Morgue” written on the door. There’s no version of this where I can see someone choosing a hatchet over any other weapon without brutality laying in the subconscious. People like that are always going to be dangerous and someone shooting them in self-defense becomes a public service.