How Did Jacksonville Shooter Get His Guns? 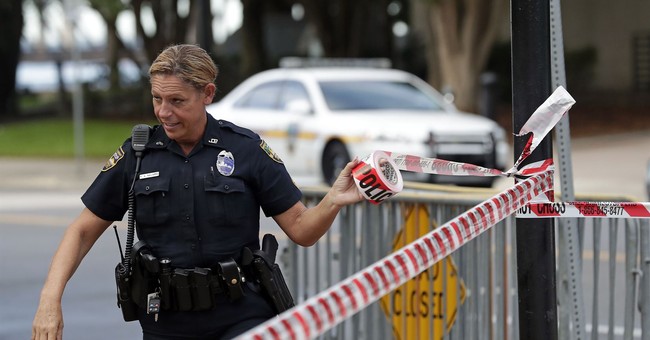 One of the key questions we need to answer in the wake of a mass shooting is how the killer got his gun or guns in the first place. This is ultimately how the debate in the aftermath will be framed, so it’s a vital question.

In the case of Jacksonville, we now know how the killer got his guns, and it raises some interesting questions.

The gunman who opened fire on a “Madden NFL 19” tournament in Jacksonville, Florida, on Sunday was hospitalized previously for mental illness, according to court records.

Divorce filings from the parents of [the 24-year-old killer] of Baltimore showed that as a teenager he was hospitalized twice in psychiatric facilities and was prescribed anti-psychotic and anti-depressant medications, The Associated Press first reported Monday.

[The killer], a competitor at the gaming event, had two handguns and extra ammunition inside the restaurant where the competition was taking place, officials said at a news conference Monday afternoon.

The divorce filings showed that [his] parents disagreed deeply on how to care for their son. [His] father claimed his estranged wife was exaggerating symptoms of mental illness as part of the couple’s long-running and acrimonious custody battle. They divorced in 2007.

Katz legally purchased his firearms —  .45 caliber and 9mm handguns — in Baltimore, Maryland, Jacksonville Sheriff Mike Williams told reporters. He bought them within the past month from a licensed dealer, officials said.

This is very interesting. If the killer was involuntarily admitted, then it was illegal for him to have purchased the firearms in the first place. A voluntary admission, however, is a different animal.

As a teenager at the time, the killer’s admission may fall into somewhat of a gray area in the law. First, would it count as a “voluntary admission” even if it was technically against his wishes, but not those of his parents? They are the ones who have a say on the welfare of minors, after all. If so, he may well have been able to purchase a firearm without a problem.

It also raises the question of whether an admission as a teen has any bearing on purchasing a firearm as an adult. The law doesn’t specify one way or the other, which I’d take to mean it doesn’t matter one way or another.

A person may not possess a regulated firearm if the person:

Two possible conditions will bar someone from owning a firearm. One is that they were admitted for more than 30 days. The other is the involuntary admission.

But again, that depends on whether juvenile admissions apply.

Frankly, the whole thing is a giant mess at this point. While the media is reporting that he purchased his guns legally, that remains to be seen. He may well have purchased them through a dealer, but we still don’t know if he was legally allowed to buy them.