Dems Freak About Potential Use Of Education Department Money For Guns 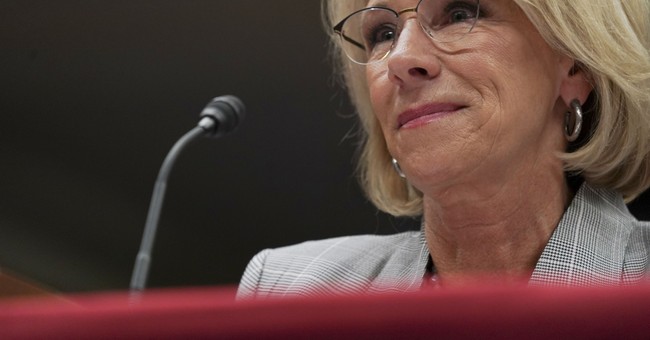 By now, we should all understand that the Democrats aren’t fans of guns. Even though there may be some pro-gun Democrats running around, the party itself seems to believe that the Second Amendment is little more than a quaint suggestion at best.

So, with that in mind, we shouldn’t be surprised that they completely freaked out over the idea that money from the Department of Education might be used to buy guns to keep students safe, especially when that money might be coming from a fund that’s basically educational welfare.

Tuesday’s letter, signed by more than 160 lawmakers, makes clear that federal law prohibits the Education Department from using funds DeVos’s team reportedly considered using to provide teachers with firearms and training. DeVos has until the end of August to respond.

Details about DeVos’s plan surfaced in an article by The New York Times, which explained her department was reviewing a specific grant program for loopholes. Language in the Student Support and Academic Enrichment program makes no mention of prohibiting weapons purchases.

The $1 billion program is listed under the Every Student Succeeds Act that’s intended to support academic and enrichment opportunities in the country’s poorest schools, so using the funds otherwise would undermine the program’s spirit and intention, the Times reported. The department started floating the option after school shootings earlier this year in Parkland, Florida, and Santa Fe, Texas.

And, frankly, he doesn’t know what he’s talking about.

First, I challenge him to find anywhere in the U.S. Legal Code that says the Department of Education can’t purchase guns. I seriously doubt he’ll find any such thing, and as such it’s not in direct contravention of federal law. Now, I’ll grant that it may not be what that money was meant for, but unless the language of the law says DeVos can’t do it, Murphy is talking out of his fifth point of contact.

Further, I challenge him to find one real bit of evidence that this doesn’t make our schools safer. Just one. He can’t provide it, though. All they have are speculative studies and fearmongering.

The fact is, this parent wants to see teachers who want to be armed to have the option of doing so. My student son does as well. I know several teachers who have expressed this desire also. This isn’t nearly as universal as Murphy wants to make it, but why should that be surprising? Murphy’s rabid anti-gun zealotry is a hallmark of his entire ideology, so it makes him easy to dismiss. He has the people of Connecticut behind him, though people seem to be abandoning the state, in part due to policies enacted by people like Murphy, so it’s probably best that he doesn’t get his way on anything.

Allowing teachers to be armed? Only a fool would suggest it’s a problem while also pretending teachers are some kind of saints.

Oh, So That’s Why McConnell’s PAC Pulled Out of Arizona
Townhall
Randi Weingarten makes a complete tool of herself trying to correct DeSantis on American History and OMG-LOL
Twitchy
DeSantis Delivers the Perfect Response to Biden's Pettiness Over Hurricane Call
Redstate
The Morning Briefing: DeSantis Looks More Presidential Than Biden in Lead-Up to Hurricane
PJ Media