UN, Not Americans, Responsible For 100,000 Guns On Black Market 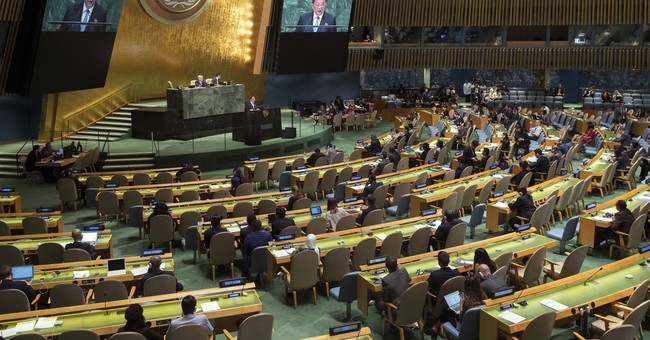 A number of people seem to look at the United Nations as a good thing. In truth, it probably could have been something good, but instead what we see is a group that gives third-world hellholes the same standing as the United States and a platform that allows them to lecture us on all the ways we suck. It’s pretty rich coming from countries that have difficulty consistently feeding their people, but there you have it.

One area we get lectured to on is gun control. After all, the “civilized” nations all strictly restrict guns and we don’t even come close to what they do. Clearly, the hundreds of thousands of guns on the black market is because we refuse to embrace civilization and entertain a more enlightened position on firearms.

Only, well, the guns that are on the black market aren’t really our fault.

Gun control proponent Allison Pytlak explains that a benefit of the ‘new’ ATT would be, “the closing of legal loopholes to prevent diversion of arms to illicit markets … stopping diversion should result in fewer arms finding their ways to militias, criminals, and terrorists.” Though Pytlak argues this nicely, the fact that U.S. citizens privately hold approximately 320 million firearms, that rarely enter the Black Market arena, seems to eludes the thought process.

Behind all the pompous critiques, was the knowledge that they could not control their weapons, let alone ours. UN peacekeepers themselves are/were fueling the local Black Markets with firearms diverted from UN stockpiles. This is an important point that is rarely brought to light.

The ATT proponent’s failures are massive. It became so apparent to so many that the lie could no longer be covered up. The diversion of weapons, including real assault rifles, pistols, armored vehicles, grenade launchers, and heavy mortars, among other things, became such a routine occurrence that there was no other choice but for them to fully and openly disclose the fact.

Eric Berman, director of Small Arms Survey, an anti-weapons group, said in October of 2017, “what was once seen as not a problem or as too sensitive to discuss, is now viewed as something that needs to be addressed and is no longer taboo.”

Berman wrote a report, ‘Making a Tough Job More Difficult,’ which attempted to minimize the problem. He explained that the UN was, “Hindered by numerous budgetary, logistical, and infrastructure constraints; shortages in staffing and expertise; and gaps in UN policies and procedures.” Additional reports can be expected.

We suggest that you download this report for a more thorough read and send it around to your friends and family, to publicize it. It is the epitome of the incompetence and hypocrisy of the UN, and the proponents of the ATT. It is an example of their past failures and failures still to come in the future.

Let’s be perfectly honest. The UN is nothing more than a dumpster fire. The UN’s purpose was to prevent another world war, but since then, it has tried to govern the entire planet. If it weren’t for the obstinance of countries like the United States, it probably would.

The thing is, the UN is the problem here. It expects us to fall in line with its thinking, but it can’t even conform to its rhetoric. It’s a classic case of “do as I say, not as I do.”

At least with the U.S., we protect the individual’s right to keep and bear arms, not just the tin-pot dictators and petty warlords.