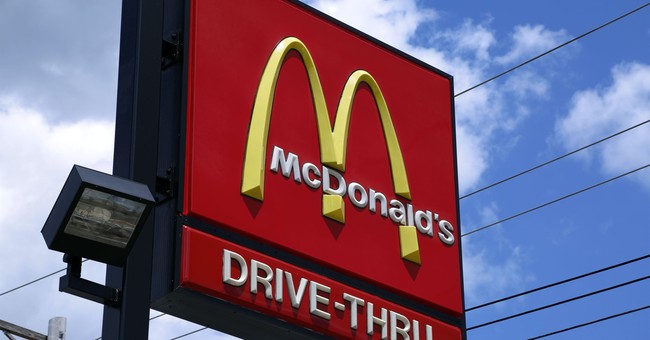 “People with guns never stop mass shootings,” the anti-gunners like to scream, despite evidence to the contrary, especially in the wake of the Tree of Life synagogue shooting this past weekend.

However, we have more evidence that they do stop mass shootings. After all, an armed father took out a potential mass shooter in a McDonald’s in Alabama on Monday.

A dad with a gun put a stop to a shooter who opened fire and injured several — including the father and one of his sons — inside a McDonald’s restaurant in Alabama.

Once again: The Second Amendment saves.

The father, who hasn’t been publicly named, was leaving the fast food place on Saturday when a masked man walked in and began shooting.

The dad then pulled his own weapon and started firing at the masked shooter — becoming the shooter’s target in the process.

The father sustained life-threatening injuries, according to WBRC. His son is recovering from his own gun-related injuries. The masked gunman, meanwhile, died from wounds suffered during the incident.

Simply put: If it hadn’t been for that armed dad, the bloodshed would’ve been a lot worse. If not for his gun-toting self, the media reports on this would be a lot different, a lot more tragic, and the focus would be on how many were murdered, not saved.

“The shooting took place at the McDonald’s across from Princeton Hospital,” WBRC reported. “A masked man entered the restaurant when an employee opened the door for a father and his sons to leave. The masked man then opened fire in the restaurant. At that point, the father began shooting at the masked man.”

Now, police aren’t sure what the masked man was trying to do. Was he an actual mass shooter, was he trying to kill someone in particular, or was this just the dumbest robbery attempt in Alabama history? After all, opening fire might scare people into compliance, but it also drastically increases the odds of someone calling the police.

However, he started shooting from the start, and that got him shot by an armed father who wasn’t interested in waiting to see if this guy was going to kill everyone or just someone.

The father won’t be charged with anything. After all, Alabama is a Stand Your Ground state, and that’s what those laws are for.

It seems clear that no matter what the shooter’s motive was, people were likely to get hurt or killed. The armed citizen stepped in and put down the rabid dog that walked into that McDonald’s.

“Oh, you shouldn’t dehumanize people like that,” someone will probably try to argue.

To that, I respond that he dehumanized himself the moment he decided shooting up the restaurant was the best course of action, regardless of his motivations. I don’t care if he came from a disadvantaged home. I don’t care if Mommy and Daddy wouldn’t buy him a Ninja Turtle for Christmas. I don’t even care if there were no parents in the picture.

While all of that plays a factor in someone’s development, they still have to make a conscious choice to take a gun and do something like that. It’s at that moment they’ve dehumanized themselves and become a rabid dog.

In this case, an armed citizen did and he deserves our praise for it.

The Sad, Sordid Saga Of Cleveland's Anti-Gun Mayor And His Namesake Grandson

'Where Is She?' MSNBC Host Rips Kamala Harris For Being a Miserable Failure on the Border
Townhall
CBS News reporter says White House aides shouted down US reporters' attempts to ask President Biden questions
Twitchy
Biden Is Not Going to Like What Americans Have to Say in New Poll on His Mental Stability
Redstate
As Biden's Presidency Crumbles, Democrats in Congress Lose Hope
PJ Media