In terms of 2A news, perhaps the biggest story of 2021 has been the explosive growth in the number of Constitutional Carry states. We began the year with 16, and we’ll conclude the year with 21 states that recognize the right of legal gun owners to lawfully bear arms without a government permission slip. And as The Reload’s Stephen Gutowski and I discuss on today’s Bearing Arms’ Cam & Co, while this year’s been a great one for Constitutional Carry, next year’s already shaping up to have additional successes.

So what states are most likely to approve a Constitutional Carry law of their own in the coming months? One easy way to get a sense of what states are in play is to look at the states where Republicans are in complete control of state government. Thanks to Ballotpedia for its handy map showing just that. 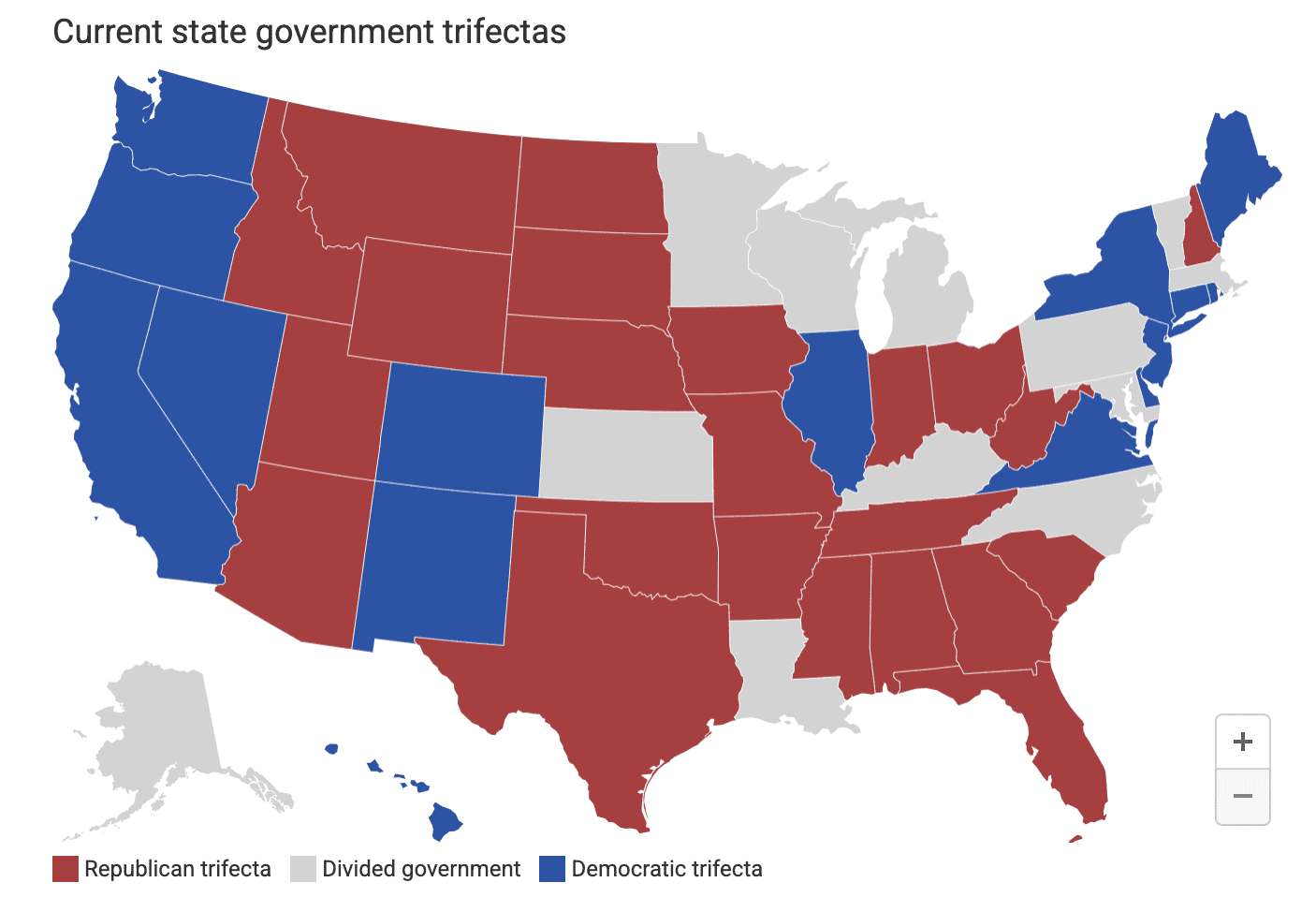 Now, most of those red states have already approved Constitutional Carry legislation (a few of the gray states like Alaska, Kansas, and Kentucky have also previously established permitless cary laws as well). But Florida, Georgia, Alabama, South Carolina, Ohio, Nebraska, and Indiana are all on the clock, so to speak. And of those seven states, both Gutowski and I agree there’s a strong possibility that four or more will join the ranks of permitless carry states in the next legislative session.

Florida – As Gutowski reveals on today’s show, a spokesperson for Gov. Ron DeSantis says the office doesn’t dispute the characterization of a video that seems to show the governor responding “of course” to a question about whether he’d sign a Constitutional Carry bill. If DeSantis throws his weight behind the measure, it’s almost guaranteed that a bill will get to his desk. And with DeSantis eyeing a presidential run in 2024, signing Constitutional Carry into law would be a big boost for his resume.

Ohio – The Ohio House of Representatives has already approved a Constitutional Carry bill this year, though it’s highly unlikely that the Senate will follow suit before January 1st. Still, I expect that permitless carry will be one of the biggest 2A priorities for Republicans in the state in 2022, along with reviving and revising the state statute authorizing school districts to have armed, trained staff in place on campuses. The bigger question in Ohio is what Gov. Mike DeWine would do with a Constitutional Carry bill if one gets to his desk. In 2019, a DeWine spokesperson said he supports Constitutional Carry in principle, but held back on officially endorsing a permitless carry bill at that time. Since then, DeWine has sought GOP support for his Ohio STRONG package of gun reform measures, so he may want to do some horse-trading with his fellow Republicans before he commits to signing a Constitutional Carry bill.

Indiana – While a permitless carry bill introduced in Indiana this year didn’t become law, the Republican-controlled legislature did approve a bill removing all governmental fees for a carry license. More than 25,000 Hoosiers applied for their license in the first week after the fees went away, and some Second Amendment advocates believe they have the votes to follow up on that success by passing Constitutional Carry in 2022.

Georgia – A Constitutional Carry bill introduced in the state this year didn’t find much traction among Republican lawmakers, but with Gov. Brian Kemp looking to defend his incumbency against a primary challenge by former U.S. Senator David Perdue, it would be smart politics for the governor to get behind permitless carry language as soon as possible. There are also signs that Republican leadership in the legislature is getting behind permitless carry, though we haven’t seen any official pronouncements yet.

I’m less optimistic about Constitutional Carry passing next year in South Carolina, Alabama, and Nebraska, even though the three states have Republicans in control of the legislative and executive branches. South Carolina Republicans approved a measure this year allowing those with carry permits to carry openly as well as concealed, and Democrats pitched such a huge fit over the rather modest change that I don’t know if there are enough GOP lawmakers willing to have an even bigger fight over permitless carry.

Similarly, in Alabama sheriffs and police chiefs helped scuttle a Constitutional Carry measure, and while supporters are vowing to reintroduce the legislation this year and even claim to have the votes, I’m hopeful but not convinced that’s actually the case.

In Nebraska, opposition to Constitutional Carry in the three most populous counties is likely to doom a permitless carry bill, much like the legislation that was introduced this year but ultimately failed to win approval after being watered-down.

While none of these states are a lock to pass Constitutional Carry, I think the odds are in gun owners’ favor when it comes to adding at least a couple of them to the rolls of permitless carry states. And of course the more engaged and involved gun owners are in pushing for these measures, the better the chances that we can convince even reluctant lawmakers to take a stand in support for the Second Amendment and the full recognition of our right to bear arms in self-defense.