Earlier this week I talked about the slow-walking of concealed carry permits in blue states from California to New Jersey, but the issue may be more widespread than I originally thought. A recent news story out of Charlotte, North Carolina highlighted the woes of Joyce Upchurch and her husband; a couple in their 60s who decided earlier this year that they wanted to be able to carry a firearm for self-defense because they don’t feel safe in their own neighborhood.

Upchurch and her husband dropped off their application with the Mecklenburg County Sheriff’s Office back in February, but had to wait until April to be fingerprinted as part of the application process. From that point, Upchurch thought the sheriff’s office would have to approve her permit within 45 days, but we’re now six months out and she has yet to hear anything about the status of her application.

WSOC reporter Jonathan Lowe reached out to Sheriff Gerry McFadden to find out what was going on, and while McFadden’s office has been sued in the past over taking too long to issue permits, this time he says the blame lies elsewhere.

“We are at the mercy of the hospitals and these institutions that we have to rely on to fulfill the obligation of actually issuing these concealed carry permits,” McFadden said.

McFadden said that the 45-day countdown doesn’t start until his office receives all of the necessary information.

“The 45 days is, once we receive all of the records back then we have to take a staff member to read through all of your medical records,” he said.

Lowe learned that the sheriff’s office is waiting on the Department of Veterans Affairs to release Upchurch’s records.

After his original story, Lowe heard from a VA spokesperson, who confirmed that the federal agency has a backlog of records requests that it is currently unable to fulfill in a timely manner.

“We are experiencing a significant increase in the volume of medical record requests supporting our care for veterans, which is our priority. This has reduced our capacity to process medical correspondence, resulting in longer response times for concealed carry weapon permit requests.”

How long are we talking about? Well, according to the Mecklenburg County Sheriff’s Gun Permit Dashboard, the law enforcement agency is still waiting on VA records that were requested back in February of this year. 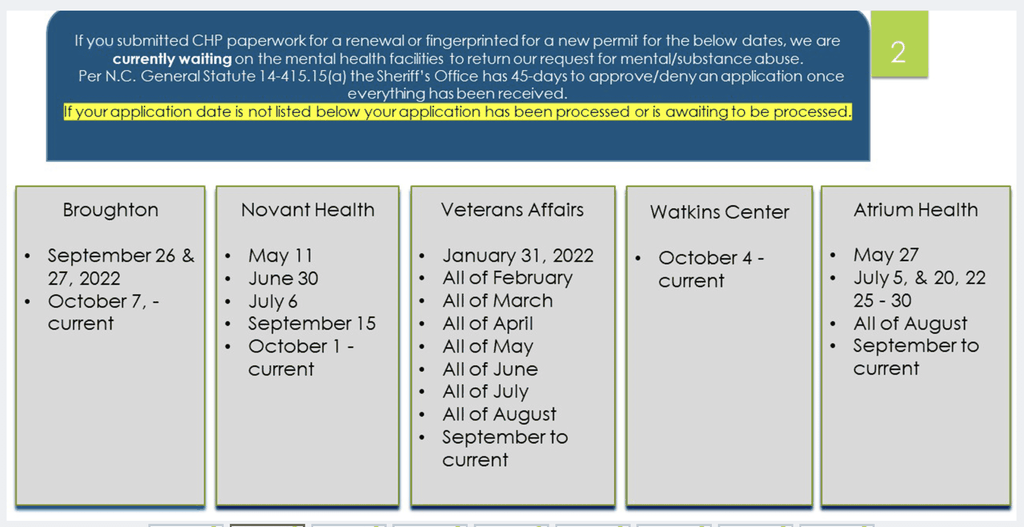 As you can see, the VA isn’t the only health system that’s struggling to submit these records in a timely manner, but it is by far the worst offender in terms of the length of the delays.

The mental health reporting requirement is part of North Carolina’s concealed carry law and not a federal requirement, but this isn’t the only state to include these records as part of their concealed carry licensing process. It’s unclear at this point just how many concealed carry applicants around the country have been impacted by these delays, though I have contacted the VA’s public affairs office in the hopes of learning more information about how widespread this issue is and what steps, if any, the agency is taking to address the backlog.

If the VA can’t get this situation under control ASAP, I’d love to see Republican lawmakers introduce legislation in North Carolina next year that would at least mandate local sheriffs proceed with processing and approving concealed carry applications within that 45-day window, even if the federal government has not returned all of the records mandated under state law. Otherwise, folks like Joyce Upchurch are going to continue to face unconscionable (and I believe unconstitutional) delays in exercising their right to bear arms.

Of course, I’d prefer to see Constitutional Carry as the law of the land, not only in North Carolina but all 50 states. As we’ve seen, even in “shall-issue” states the bureaucracy can serve as an impenetrable barrier between you and your rights, but if your right to carry isn’t contingent on getting pre-approval from the state or any of its political subdivisions then any personnel problems on the part of government agencies aren’t going to result in you being deprived of your ability to lawfully carry a firearm in self-defense.

The Case Against Everyone Else 2024 – Part 2
Townhall
Is this GMA promo for Sam Bankman-Fried interview the start of a 'rehab tour,' or no?
Twitchy
Doocy and Melugin Tag Team to Take Down WH's Blatant Biden Border Lie
Redstate
Police Release Confusing Information About University of Idaho Murders
PJ Media