I remember calling an FFL in one of the boroughs many years ago asking questions about transferring an air gun, and the FFL went on a tear, directed at me mind you, about how they’re illegal in New York City. I was in search of answers to a pile of hypothetical questions and I did end up talking to an FFL in New York State, outside of the boroughs. The FFL I talked to laughed at me and said “You’re asking about having us ship a toy?”

The laws in New York are screwed up. They’re so screwed up a famous court case that’s been ignored by the State, occurred because of their own arrogance and disdain for civil liberties. Even though people in New York City have to navigate multiple sets of awful laws, it’s okay, because the New York City Police Department has their backs, and is keeping them safe.

While the Big Apple crumbles into a state of despair, highlighted back in April, emblematic of one of the Mayor’s staffers getting robbed recently, and the NYPD showing how tough they are on crime, we have more good news. Recently the NYPD went out of their way to inform the public of the City’s prohibition against “bead blasters”, also known as “gel blasters”. 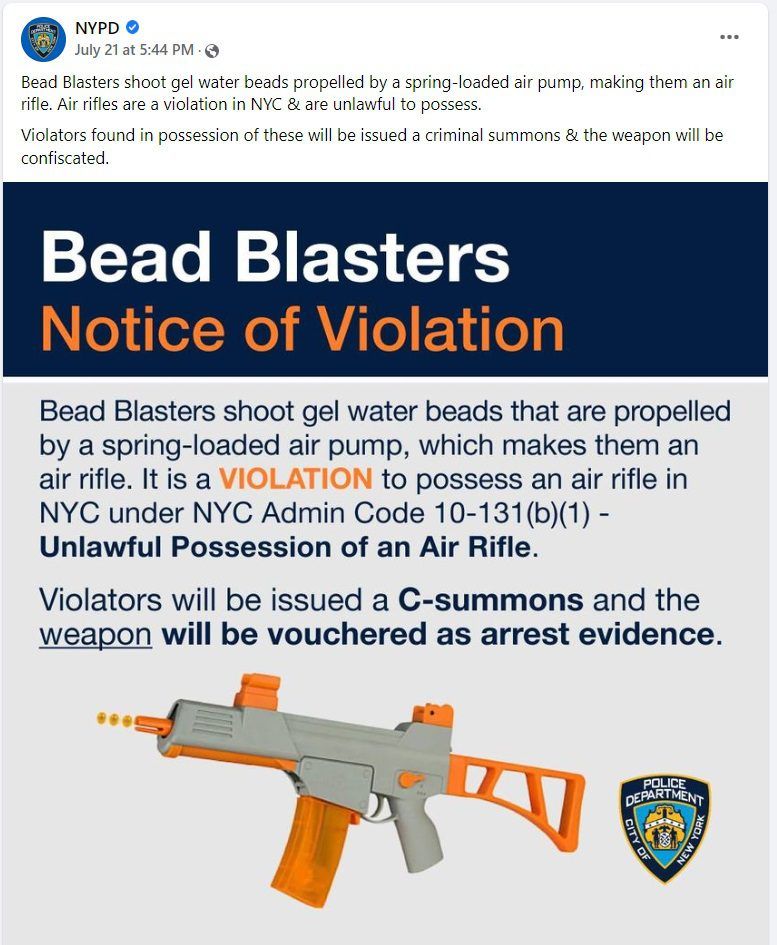 If the July 21st public service announcement was not enough, the NYPD also went above and beyond to show their most recent contraband confiscation and their own rendition of “one of these things is not like the other”. 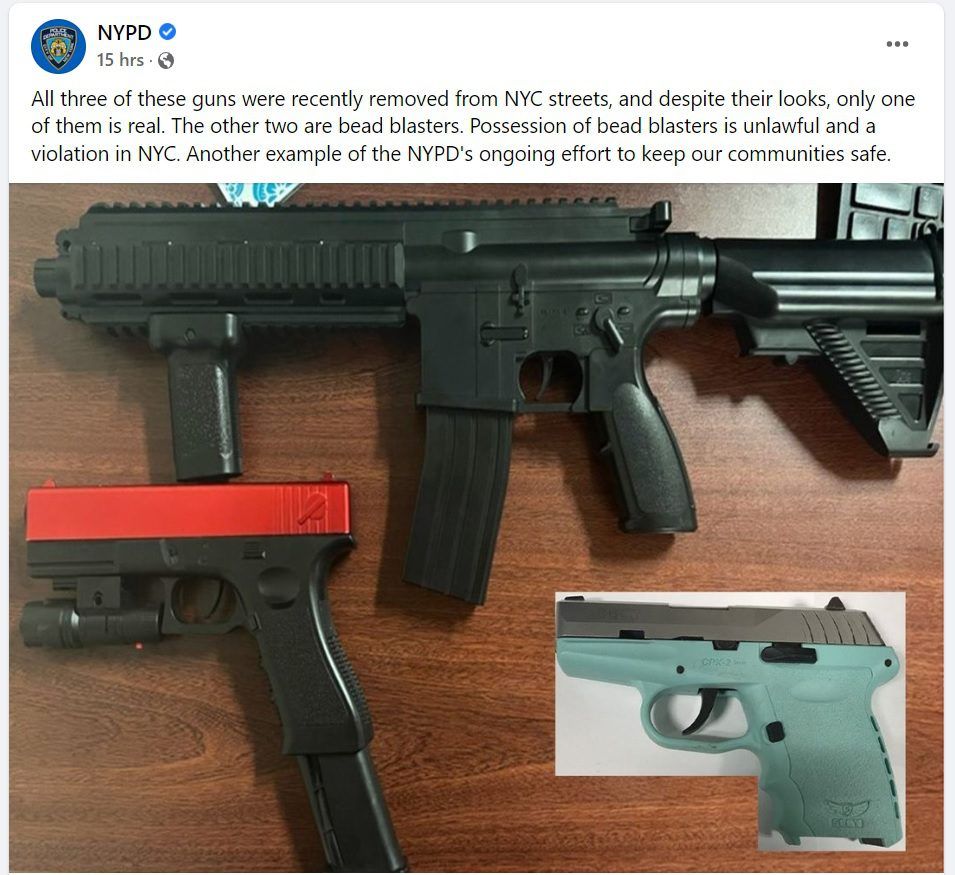 If you’re not aware of what a “bead blaster” is, they are toys. Sometimes referred to as “gel blasters”.

Gel blasters, or gel blaster guns, are a type of toy gun that shoot gel beads made up of water. They’re a safer alternative to airsoft guns and aren’t as controversial. These gel guns are also used in close-quarter combat (CQB) skirmishes. These are similar to airsoft games, where two teams battle against each other in a “battle royale” style.

The absurdity of these posts has no bounds. What’s actually going on over at One Police Plaza? Has the leadership over there gone so daft that they think these tone deaf posts are actually going to speak to the public at large? Are these posts supposed to be akin to elicit a similar reaction that the Whos running into the Grinch on the streets of Whoville have, recoiling in disgust and fear?

Last night, great work by our public safety officers whom removed an Orbeez gun off of our streets.
These Bead Blasters shoot gel water beads propelled by a spring-loaded air pump, making them an air rifle. Air rifles are a violation in NYC & are unlawful to possess. pic.twitter.com/MNixDWNnZm

If someone is taking these posts seriously, they’re part of the problem, and New York City can rejoice knowing that their progressive nonsense has finally completely won. I actually invite the NYPD to offer their own commentary about the absurdity of not only the laws, but flaunting their epic crack-downs on this criminal element by reaching out to me. I’ll happily entertain whatever pathetic excuses they have and report back, unredacted, any verified correspondence.

I get it, some of them look like real guns, but not all of them. The precept of “people who play stupid games, get stupid prizes” applies here.

I’d like to take this opportunity to personally congratulate NY’s finest for doing what needs to be done to keep toys off the streets. Meanwhile, they have a prosecutor that released a suspect involved in an assassination attempt, but thank the heavens toys are being swept up from criminals’ hands. The people of New York City, the Empire State, the Country, and World can’t be prouder of the NYPD than we all were in the days after 911. Bravo for your bravery. Someone over there is really #nailingit!

China Is Not Happy That We Shot Down Their Spy Balloon
Townhall
Smearing DeSantis: How dishonest hacks and dumb people used an AP fact check to smear the governor
Twitchy
'Dark Brandon' Returns in Desperate Attempt to Gloss Over Joe Biden's Weakness
Redstate
Hot Air: No Global Warming for Eight Years
PJ Media