NJ PBA on the naughty or nice list this year?

As this is being written the NJ Senate is having a committee meeting concerning the fate of New Jersey’s “carry killer” bill (A4769 and S3214). Much like New York, New Jersey politicians have elected to follow the often racist tradition of ignoring the United States Supreme Court, and has rolled out a work-around bill to squash lawful carry in the state. New Jersey politicians have outwardly noted that the proposed legislation is about affecting the law abiding, and one racist/elitist lawmaker went out of his way to note the people that live in areas that are mostly minority (Black and Latino), should basically not have so-called increased access to firearms. The bill, should/when it becomes law, will increase the fees in order to get a carry permit, permit to purchase, and FID card. The measure will also impose mandatory non-existent insurance policies to be procured, and creates a long list of where thou shalt not carry (if you’re a peasant). How did New Jersey’s boys in blue respond to this bill?

While I was warned by several patriots that I’d be labeled anti-police and all the rest by bringing to light the following inconvenient truths, please allow the record to reflect that I am very pro police as well as pro law and order. Even though as some advocates point out it will in fact be the police that seize people’s firearms should an order ever get executed, I am a firm believer the police are our friend from a big picture view. We can discuss all other scenarios to our hearts content in a different forum. That being said, let’s turn to some information that’s been uncovered.

Through an OPRA, New Jersey’s equivalent of a Freedom of Information Act request, one Reditter shared the witness slips for the November 14, 2022 Assembly Judiciary Committee meeting. While these slips are not necessary to figure out if the leadership of New Jersey’s peace officers are on the side of the people, or on the side of ensuring the police are a special category of persons, better than the general public, sharing them makes available all the recorded responses for that session. 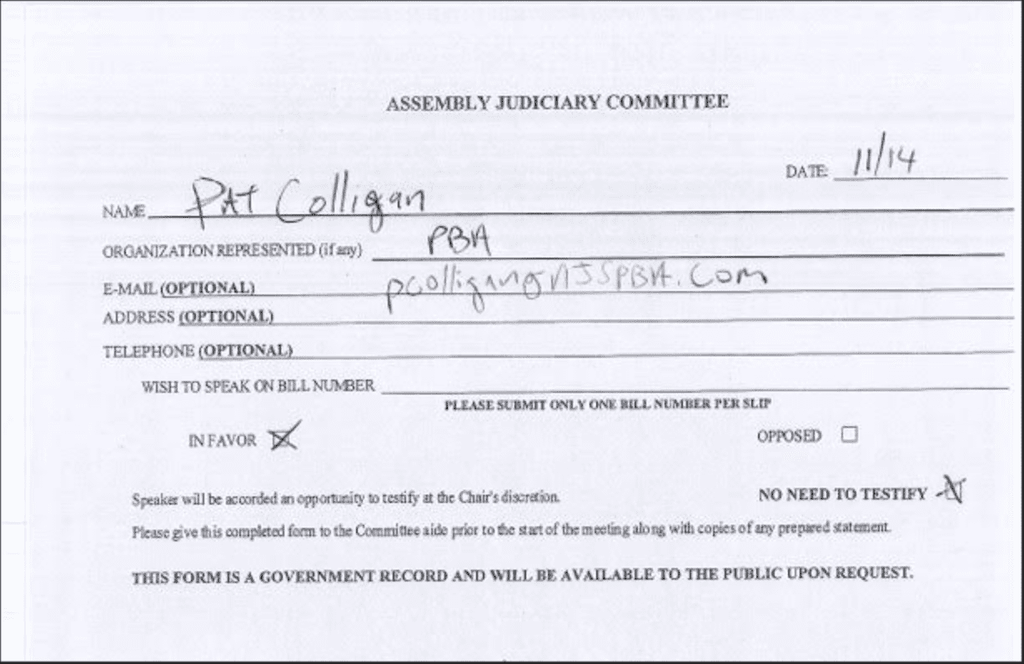 The President of New Jersey’s PBA, Patrick Colligan submitted a witness slip noting that he, as the president of the NJ State Policemen’s Benevolent Association, is in favor of the bill. Of course advocates for the police and retired police made sure that changes to the bills were made to exclude this class of people from the list of restricted places that the rest of the unwashed masses need to make sure they don’t visit while armed.

If the slip in support of this bill is not enough, how about this report where Colligan sounded off on the topic?

“I would like to thank legislative leadership for agreeing to over 20 amendments at our request over the last several weeks to get this bill to a better place.  Although we would like to have seen a few more changes, this bill respects the training, qualifications and tremendous experience our retirees deserve.  They will remain an important component in keeping the residents and visitors of New Jersey safe and secure.” Patrick Colligan, President of the New Jersey State Policemen’s Benevolent Association

While I’m not going to say anything disrespectful about the millions of rank and file police officers that serve the country at large across the nation, as I know not all of them have the same view that Colligan has, I will say that Colligan is clearly an elitist pig.

Colligan supports the usurpation of the New Jersey citizen’s right to carry and clearly wants to keep a class system in place. Further, by supporting this bill, Colligan supports the same racist policies and Jim Crow laws that have kept firearms out of the hands of Blacks since the reparation era in the United States.

But is there more to this? Perhaps it has to do with the monopoly retired LEOs and cops have on the armed security market in the Garden State? With an influx of eligible carrierers, the price of general armed guards will go down, and a potential glut will occur. Why would the PBA want normal citizens to be able to interfere with such a scheme that allows double dipping?

Jay Factor, a historian on the subject recently eluded to how a PBA president from the 1920’s, Thomas Lyons, played a pivotal role in seeing the original carry bill in NJ come to pass and relied on that for his reelection. In the past Factor has said this ability for retired cops or cops on the payroll to do armed work as a side hustle had to do with NJ’s carry law in the first place.

Is this simply history repeating itself? 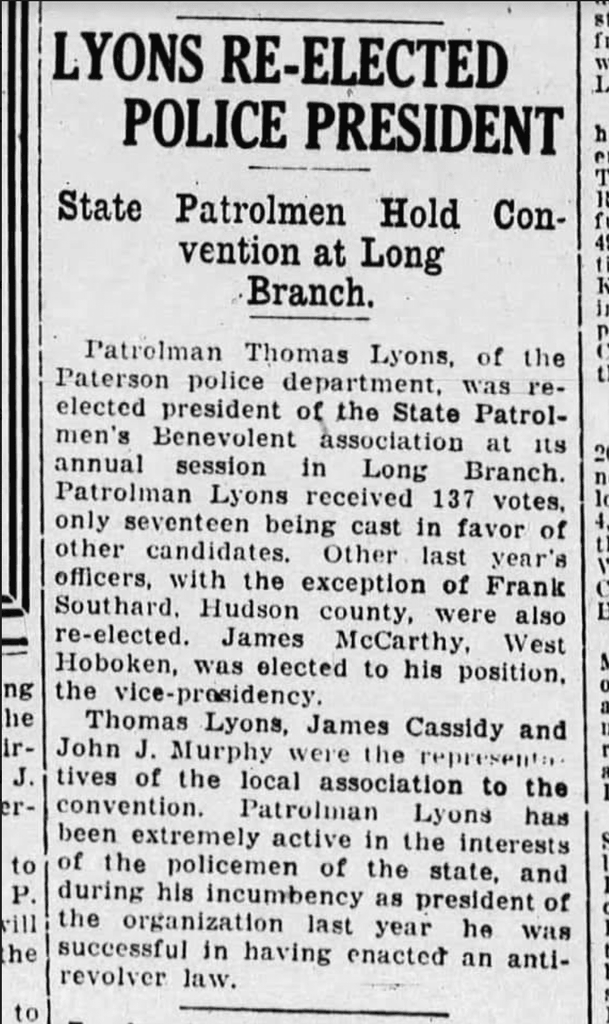 This is where I say that New Jersey State Policemen’s Benevolent Association is on the naughty list this year.

Sadly, this is going to affect many officers. I for one will not be donating to any PBA while Colligan is in charge of the Garden State Association. In fact, I just recently got a “give us money” mailer from my local PBA and I will be printing out Colligan’s slip, as well as including a copy of this article indicating my opinion of this elitist, rather than donating.

If you’d like to express your own displeasure about Colligan’s support of keeping the law abiding disarmed, you can email him HERE or write to the New Jersey State PBA directly:

Those who are PBA members that are dissatisfied with this position, may I recommend mailing your card cut up back to them with this proof of Colligan’s support of the racist and unconstitutional proposed legislation.

It’s not just the PBA who wants to continue to keep the masses disarmed, there were other witness slips from other police organizations who also expressed their support for the legislation. We have the following remarks from the cited report as well:

“We recognize the commitment of the legislative leadership to make New Jersey a leader in safe compliance with the recent Supreme Court decision.  We are pleased that this legislation will not comprise the Rights and obligations of active and qualified retired law enforcement officers.  As this bill is implemented, both the STFA and legislative leadership stand committed to making improvements along the way.” Wayne Blanchard, President of the State Troopers Fraternal Association

“The leadership of the FTA would like to thank the legislative leadership for preserving the Rights of qualified retired law enforcement officers.  Our members served honorably and are highly trained and qualified to handle firearms and should not have any restrictions burdening them.” George Wren, President of the Former Troopers Association

While we’re in the giving season, let’s all reflect on who deserves our hard earned cash. Certainly not those on the naughty list.

Massive hat tip out to Doug, from a NJ firearm social media page I frequent, for sharing as much information on this that he gathered with me. Also big hat tip to Jay Factor for bringing to light some historical information on the PBA and sharing that as well. Many thanks to all the patriots in New Jersey that have continued to stand up for our rights and have kept the information flowing.